Will Ethereum Remain the Dominant Application Builder, or is There Room for Several?

Will Ethereum Remain the Dominant Application Builder, or is There Room for Several?

Blockchain tech has proven to be a game-changer, with Bitcoin, Litecoin, and others showing us the future of payments and sending value.

Ethereum differs from Bitcoin. It can be used to build decentralized applications (DAPPS) using smart contracts that don’t require an intermediary to manage information. Ethereum is more complex and flexible than Bitcoin, but it does not necessarily mean Ethereum is a direct rival to it.

Both of these blockchains have different use cases. Bitcoin is a peer-to-peer cash system that is also used as a digital alternative to gold, while Ethereum seeks to be the foundation for a multitude of applications to be built on top of its network.

Similar to the popular Google Play Store, Ethereum could become a network that allows multifunctional applications to be built, like the messaging app WeChat, which recently added a payment wallet that allows users to send and receive NEM tokens.

One of the key strengths of Ethereum is its flexibility. It can make the necessary changes to stay competitive and is currently in the process of switching from the proof-of-work algorithm to proof-of-stake in an attempt to scale better. 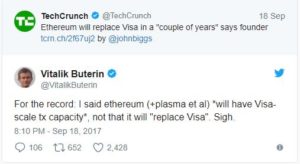 One of the greatest hurdles for any blockchain is scaling. This is a gradual process that will come in time, with trial and error along the way.

An example of how scaling is not a quick fix, but rather an evolution, is with the Internet itself. In 1995, the Internet was becoming a mainstream tool to exchange information from anywhere in the world in real-time.

At that time, the capacity of the Internet was limited. Things we use today, such as YouTube and Facebook’s tools to capture and analyse users’ demographics, were simply not possible due to the lack of advancement (made available to the public) and the infrastructure of the technology itself.

What I’m trying to say is technology takes time to evolve, and we are seeing a similar chain of events happen with blockchain tech. We know the potential capacity for blockchains, but the technology just isn’t evolved to the required level yet!

Other Competitors on the Scene

There are numerous blockchains utilizing smart contracts, such as Cardano, EOS, and NEO, to name a few, and there are competitors to blockchain technology itself, such as IOTA, which runs on something called a Tangle.

As the technology evolves, competitors emerge and seek to be faster and more efficient. 2018 could be the year where Ethereum is no longer the primary application-building blockchain, with innovative protocols quickly making their way up the ranks.

More Than One Winner?

There is certainly room for more than one winner. Competition is a good thing in a free market, and it is usually very profitable for investors.

With many of these blockchains being made open source, developers can literally select which protocol they want to build applications on and branch off of it. Another possible scenario is that we see multifunctional applications running on multiple blockchain networks, such as EOS applications being compatible with the Ethereum network.

It could become the industry standard for future apps that we download to be fully executable on a wide selection of different networks, bringing powerful protocols together and further strengthening the blockchain and cryptocurrency space.

Disclaimer: There is no guarantee that any of the above mentioned protocols will succeed, always conduct extensive research and read the white paper of each protocol for a full understanding. Invest only what you can afford to loose.