It’s not just Bitcoin setting records – the number two cryptocurrency, Ethereum, has reached $100 for the first time, setting a historic event for its community!

While Ethereum speculators expected a correction from this milestone achievement, the price at the time of writing is around $94, showing a bounce back in the low $90s. This price may change as people start taking profit from the latest rally or invest even more. 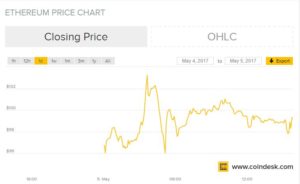 Why is Ethereum So Bullish?

Ethereum has had an excellent 2017 so far. Since news of the Enterprise Ethereum Alliance spread around the crypto space, the price has rallied, reaching stability at $40-$50, but within the last couple days, the price gained momentum, breaking all barriers of resistance and giving investors and traders much to smile about.

With Bitcoin’s price stronger than ever and the altcoin markets gaining more market capital each week, it seems almost inevitable that Ethereum would increase in price. As blockchain technology becomes more of a reality, innovative chains like Ethereum are seen as the future.

Ethereum’s function is to be able to create applications on top of its own blockchain, called Smart Apps, which give Ethereum the ability to create apps within its own app. In other words, Ethereum is a hub of innovation.

With the rise of ICOs (Initial Coin Offerings), many speculate that this is also an influencing factor in Ethereum’s price spike, as millions of dollars or equivalent in Bitcoin and altcoins are invested into projects that regularly use Ethereum’s blockchain to build upon.

In exchange, the investors are given a percentage of the cryptocurrency or tokens generated for a discounted price. It’s a type of pre-sale before launch and a way for developers to get funding for their respective project.

Many say that with the crypto space booming in growth, combined with ICOs, we could see something similar to the Dotcom bubble. Other coins are following Ethereum’s behaviour, perhaps not in price (yet), but in outperforming themselves!

Ripple and NEM Give Investors Over 1,000% Gains Combined! 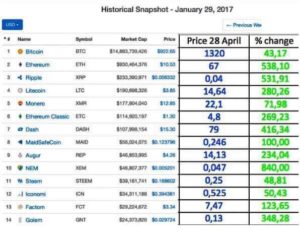 Although many other coins have yielded gains that most traditional investors can only dream of, Ripple (XRP) and NEM (XEM) were worth less than one cent this time last year but have now reached new highs as well.

Ripple is aiming to become a global payment network for usage by the banks. A simplistic way to look at Ripple is as a digital Western Union, using a centralized blockchain that is able to trade with any currency.

With over 47 banks in Japan alone opting to work with and test Ripple, combined with interest from the Bank of England, UBS, and many others, it seems like Ripple could be experiencing an influx of investment just like Ethereum is experiencing. With that being said, a typical altcoin pump can’t be ruled out.

XRP currently trades at $0.09 and is the only cryptocurrency working with more banks than Ethereum!

NEM has given people a positive surprise. While being relatively under the radar for so long, the developers have not wanted to hype the project, and the Japanese-based chain could be a potential competitor to Ethereum in years to come.

With 100% of the code written from scratch using JavaScript, NEM is introducing new blockchain features while also using familiar features such as masternodes, with a minimum requirement of 10,000 NEM coins needed to own a masternode.

Another possible reason why the price has surged so sharply in recent weeks is the maximum coin supply of 8,999,999,999 coins, which adds the element of supply and demand. XEM’s current price is $0.07 and they will be releasing the first version of Apostille, which could be bringing more attention and hype to the coin.

If either of these two coins were bought 12 months ago, your ROI would now be over 1,000%. Can this upward trend continue and sustain itself, or will it eventually correct sharply, leaving investors in a bull trap…?

As the crypto space grows, with new developments and the dream of blockchain-based applications solving many current problems becoming a very powerful reality, we could see more innovative projects come to the surface.

Many are saying that with the ICOs and the cryptocurrency market capital growing so fast, consumers may possibly see a Dotcom bubble-style event happen, and with so much capital flooding into this young and relatively small industry, only time will tell!