Believe it or not, the digital currency race is truly underway across the globe. With recent news of the Cryptocurrency Act of 2020 coming into play next year and China’s anti-dollar digital currency in development, it’s safe to say those that don’t keep up will ultimately lose dominance and fade into the background.

More evidence of banks scrambling is a basket of Spain’s largest banks that are planning to conduct a six-month trial on a cutting-edge payment platform that utilizes blockchain technology and smart contracts. Some of the banks include Banco Santander and CaixaBank.

Meanwhile, newly-appointed European Central Bank (ECB) President (and former IMF head) Christine Lagarde, who is somewhat positive towards cryptocurrencies, has sent a letter of urgency to the members of the E.U. Parliament regarding regulations surrounding digital assets. The key point in the letter is once again Facebook’s Libra coin and its unregulated and wide-reaching nature!

“The European System of Central Banks has been monitoring this in the broader context of the entry of large technology companies or ‘bigtech firms’ into the European retail payments market.

If stablecoin initiatives achieve scale and if retail users treat stablecoins as an alternative to bank deposits, a potentially sizeable amount of retail funds could be transferred from the banking system into non-bank entities.” – ECB President’s Letter to E.U. Officials

Greater clarity on digital assets and the new dynamic they bring could allow financial institutions to operate freely and push adoption of digital assets further into the mainstream.

Numerous banks within Europe are already exploring the benefits of blockchain and digital currencies; Germany’s leading bank expects a crypto takeover within the next decade, while France is planning its own digital euro.

Facebook’s Libra cryptocurrency is causing banks to take notice from their normally safe position of having zero outside competition. Lagarde’s letter could be interpreted as a plea for help to tame the emerging solutions for an out-of-date and fundamentally broken monetary system. 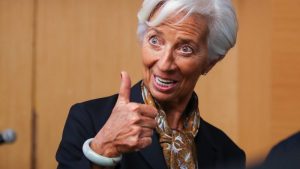