What Does The Future Hold? Where Will Cryptocurrencies Be in Five Years?

Where Will Cryptocurrencies Be in Five Years?

The Current State of Cryptocurrencies

One thing that remains constant within the cryptocurrency markets is that anything can happen, and it’s often best to expect the unexpected in this fast moving space.

As of the time of writing, we are witnessing huge growth within the market, with the overall market cap at over $100 billion and nearly every single digital coin/token showing huge growth and impressive gains for investors.

With Bitcoin, Ethereum, and Ripple dominating the lion’s share of the industry’s market capital, can we now believe they will remain in those positions? 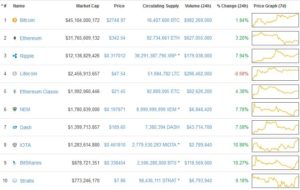 The top ten cryptos fluctuate on a daily basis, with old regulars pushed out by new, overhyped, and innovative coins/tokens. Candidates such as NEM, Stratis, IOTA, and others are swapping and flipping their positions daily.

At one point, Dash was third and Monero fourth, while at another time, Litecoin was second, and also seventh on the list. With such high volatility in the markets, no place is ever truly safe – even Bitcoin’s number one spot is in the sight of Ethereum!

Crypto in the Past

Let’s take a trip down memory lane to almost four years ago, before the infamous Mt Gox exchange incident.

The crypto space was considerably smaller, and only three of the top ten coins are still in relatively similar places: Bitcoin, Litecoin, and Ripple.

Many of the altcoins in the image below are still being traded on popular exchanges, but their prices and market caps have dropped considerably. Only in recent months has there been any significant trade volume and increase in price, which is due to a large surge of investment in the cryptocurrency markets overall. 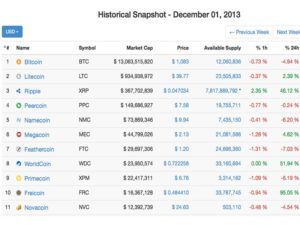 In these times, the crypto space was more simplistic. Bitcoin’s dominance was well over 85%, and nearly every altcoin was relatively unknown. They were essentially clones of Bitcoin that were trying to be a digital cash alternative.

The average market cap for the top ten is also noticeably lower than present day standards, which also reflects the growth the Industry has experienced over the recent years. In today’s market, the top eight coins have a market cap of over $1 billion each.

Where Will We Be in Five Years?

No one truly knows what the future holds. The crypto space is considerably more dynamic than it was four years ago. Not only are there blockchain-based solutions for the monetary system, such as Bitcoin, Litecoin, and Dash, but there are now solutions regarding application development and solutions for businesses with Ethereum and Stratis, including data storage and gaming.

With over 750 coins for speculation, it is realistic to assume that not all of them will survive the next four years. ICO mania has gripped the community, and huge market caps are produced for a blockchain project within weeks. With little to no tax being paid or any regulations overseeing, investors aren’t left caught out, as tokens issued back to investors are simply given a price to trade at. Where does the value and money come from to pay investors the huge returns that they expect?

New coins and tokens hit the market with hype and excitement. The projects temporarily pump in price before being sold off for Bitcoin and USD, while an unlucky few end up holding onto tokens at a loss!

The future of blockchain technology is one of growth and an extremely volatile upward trend continuing with many ups and downs. As more new capital discovers this market, the likelihood of regulators such as the SEC stepping in and penalizing exchanges is becoming a growing reality. It was only earlier this week that Ethereum, the number two cryptocurrency with a market cap of above $30 billion, flash crashed from $300 to $13.00.

We will likely see many new innovative start-ups with large market caps, but regulators may take a stronger stance on these ICO events. We could also see many of the leading projects of today being implemented into mainstream usage: Ethereum for its Smart Contracts, Ripple and Litecoin as innovative, fast micro-transaction payment networks, and Bitcoin as the store of value and a payment network.

Many analysts say the crypto economy is in a bubble and due for a historic-level crash. Others say this is simply fear mongering and the potential for this Industry has barely been realised.

This industry and the coins users buy and sell are well-known for volatility. Compared to global markets, Bitcoin and the altcoins combined are still relatively small, and many people are still unaware this phenomenon is happening.

With life-changing fortunes being created on exchanges and through ICOs via an unregulated manner and the technology itself still being so experimental, it would only take a small glitch in a new ICO or another exchange to be hacked for the crypto markets to crash. But as we see blockchain technology slowly being integrated into the general public’s lives, we could see an even more violent surge of growth within the space, which may eventually lead to a bubble, and then in the aftermath pave the way for mass adoption of the technology and its uses.

Where Are We on the Chart Below? 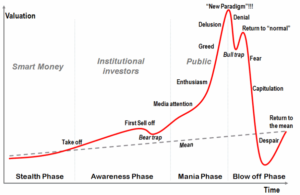