The Great Altcoin/ICO Purge – Hundreds of Projects DEAD in 2018

Survival of the Fittest

It’s no secret that the most popular and strongest cryptocurrencies are still facing lows of at least 70% down from their all-time highs, with stronger performers Bitcoin, Ethereum, and EOS still down by 67% according to data from Athcoinindex.

While the titans of the digital assets struggle to regain lost ground, smaller unseen projects and cryptocurrencies are left for dead!

Without the ability to fund projects, get listed on exchanges, pay developers, and keep the marketing campaign rolling, projects get left to gather digital dust.

There are now over 1,000 cryptocurrencies and tokens listed on Coinmarketcap.com, with countless others going unnoticed, but how many of these cryptocurrencies have managed to survive the 2018 bear market when the likes of Bitcoin and Ethereum (arguably the digital reserves of the space) have struggled to maintain their market caps since January…

Several months ago, reports highlighted that almost half of ICO projects had already failed. In recent days, new data from websites cataloguing cryptocurrency data revealed that the purge of weaker and smaller blockchain projects is still ongoing.

Two websites, Coinopsy and Deadcoins, have archived hundreds of failed blockchain and cryptocurrency projects, labeling them as “dead coins” or “dead tokens.”

Their description is “A token or coin that has been abandoned, scammed, website dead, no nodes, wallet issues, no social updates, low volume or developers have walked away from the project.”

The rise of ICOs in 2017 created a Wild West scenario in the blockchain space, allowing almost anyone to raise digital fortunes with hardly any protection and guidelines for those investing. Greed yet again clouded the judgement of many, with pyramid schemes and the desire for quick returns ruling the day. 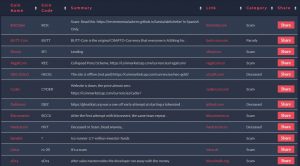 As investors began noticing, the majority of these start-up projects did not meet any of the promised expectations. With no real product or service, founders exited while secretly selling the overpriced ICO tokens and leaving investors holding an almost worthless digital asset on a back alley exchange with little to no trading volume.

Other projects were simply not able to develop a scalable blockchain or application, as this requires funding, dedication, and vigilance. Getting listed on high-volume exchanges can also set back a project into the millions – without trade volume and liquidity, the coin or token is subject to manipulation, delisting, and not being used.

The Logical Cleansing of a Bear Market: Time to Step Up!

It’s not just problems with funding or outright frauds that can derail a start-up in the blockchain space – attacks on a network can also render a cryptocurrency useless.

As I covered several weeks ago, a large portion of popular cryptocurrencies are vulnerable to something called a 51% Attack. This can stop transactions from being processed and opens up the risk of double-spending.

Another key insight is that bear markets flush out the weaker players, leaving room for the best projects to dominate and grow while giving investors and businesses excellent opportunities to make profit and take advantage before competitors.

There will come a time when blockchain projects will need to move from speculation to utility-driven valuations. If they cannot scale or fulfill the promises detailed in their white paper, the market will disregard them and move on accordingly. How many popular altcoins currently in the top 100 by market cap can or will scale while remaining secure against the barrage of attacks yet to come…?