In what has been one of the most important weeks of Bitcoin’s short lifespan, patient Investors can now rejoice, as Bitcoin broke through the resistance barrier of $3,000 to reach highs of around $3,300!

Despite the bullish year so far for Bitcoin, altcoins, and ICOs, the fear of Bitcoin forking into two versions hung over the markets like a bad smell, with the buildup to the August 1st deadline of the user-activated soft fork causing several market corrections in July.

On August 1st, the community witnessed the creation of Bitcoin Cash (BCH) and the markets surprised many, as the original Bitcoin maintained its price above $2,500 and remained stable despite the uncertainty.

Due to the chain splitting, the majority of Bitcoin holders were given an identical balance in Bitcoin Cash. This also gave people an incentive to buy more Bitcoin during the buildup to the hard fork in the final days of July, which could also have contributed to Bitcoin’s price holding above $2,500-$2,900, as many wanted more “free” BCH to sell back in to Bitcoin.

BCH temporarily touched $700 earlier this week but has since slowly declined in its trading price. Due to network instability and a lack of hashing power, users had to wait up to 24 hours for transactions to be confirmed on the network.

Hashing power has since increased, and with the mining difficulty adjusting, more blocks are being processed and the network is running much faster. Time will tell how fast the network will stabilize and grow.

BCH and BTC have certain differences: BCH has a block size of up to 8MB and seeks to scale on-chain, while BTC currently has a block size of 1MB and is using SegWit, which makes more efficient usage of the block capacity and its transaction data within, allowing it to enable off-chain solutions to scaling, such as the Lightning Network and smart contracts.

Since the activation of BIP91 and the almost guaranteed lock-in of SegWit (BIP141) in a matter of days, Bitcoin has sharply recovered from its $1,800-$1,900 low last month, a bullish indicator that stood against the FUD mentality coming from the hard fork news.

With the activation of SegWit breathing life into Litecoin’s economy, we are now starting to see similar actions in Bitcoin’s value. With the network’s capacity no longer near full capacity, the fees for sending funds will become dramatically cheaper once SegWit is activated.

This could also be an influencing variable in why Bitcoin has yet again outperformed itself, and it stands as proof the market wanted SegWit. 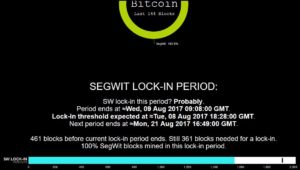 The hard fork happened and Bitcoin broke its all-time high. Perhaps everyone simply worried too much and underestimated Bitcoin’s ability to survive.

Although no one can predict a price for Bitcoin, there are numerous variables that could cause the price to go much higher during the rest of the year: the Lightning Network, an increase in investors, usability, and even the potential for smart apps. However, there is still the possibility of another hard fork, as part of the SegWit2x agreement may become go under debate during the October/November time frame.