Is a Hard Fork Really Coming?

Is a Hard Fork Really Coming?

How Likely Can it Be?

Bitcoin’s price has tumbled from fears of a hard fork caused by Bitcoin Unlimited’s desire to increase the block size, but is it really going to happen?

Unlimited seeks to increase the block size, which is currently capped at 1MB, causing slow transactions, while Core wants to activate Segregated Witness through a soft fork and implement the Lightning Network, which would take congestion off the chain.

Segregated Witness has stalled at around 25% out of the 75% voter approval needed to signal for activation, leaving the chances of a hard fork wide open (potentially).

As talks between Bitcoin Core and Unlimited regarding how to scale Bitcoin have concluded in a stalemate, relations are at a breaking point and fear has gripped the market as Unlimited inevitably prepares to run their own version of Bitcoin separately.

This is done by splitting Bitcoin’s blockchain in two, creating a “fork” effect, with one remaining as the original and the other respective chain having the alternate version.

With each passing day, it looks more likely that Bitcoin will experience a hard fork, something that people thought it would never come to!

It’s Happened to Ethereum More Than Once!

In July 2016, the number two cryptocurrency, Ethereum, successfully attempted a hard fork in response to an attack on the DAO, an Ethereum-based project built on Ethereum’s chain.

Although the decision to fork was made quickly, the consequence was that those who did not agree with the hard fork continued to mine with the original Ethereum chain. This caused a new coin to form and was named Ethereum Classic.

The reaction caused the price to crash, and for the latter half of 2016, Ethereum bottomed towards the $6.00 region, creating a sense of distrust in the community and a temporary lack of confidence.

Later in the year, Ethereum went through a less controversial hard fork for a second time after a weakness in the software was discovered. After a series of relentless DDoS attacks occurred, the overall community deemed this as the correct action to take.

Exchanges Are Prepping for the Hard Fork 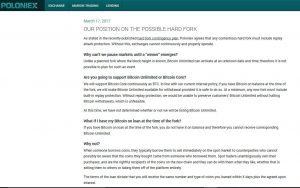 To be expected, the exchanges are preparing for the worst-case scenario. Popular exchanges, such as Poloniex, have issued warnings to users about the possibility of a hard fork, while recognizing the original Bitcoin (Core) as the true Bitcoin.

Poloniex was also the first exchange to list Ethereum Classic on their site!

In the event of Unlimited moving forward with their own chain, the overall majority of exchanges have stated that they would deem it as an altcoin (BCU) and not as the true Bitcoin (BTC).

Although warnings like this have shaken some Bitcoin users, it also sends a reassuring message that no matter what happens, the original version of Bitcoin will stay recognized as the true Bitcoin.

Does Unlimited Have the Backing to Do This?

With a low approval rating from several polls, the majority of miners sticking with Core, and exchanges recognizing BTC as the true chain, Unlimited doesn’t seem to have the support they need to truly take over Bitcoin. Even so, they can still push forward with a fork, as Unlimited already has the hashing power to do so.

The largest mining pool, Antpool, has already opted to use Unlimited’s version, which means that if there was a fork at this very moment, BCU can exist with an impressive start, while some websites have already started estimating the cost of one BCU.

The nodes that signal for the desired Bitcoin software are in favour of Core at the moment. With Unlimited’s support gaining in number over the recent months, this growing support could enhance the chances of a hard fork and allow BCU to successfully pull this off.

Many believe the slow and steady approach is needed in order to solve Bitcoin’s scaling debate, rather than rushing in with a potentially damaging hard fork. The belief is that Core’s SegWit, which is done via a soft fork, should be tried first.

No one truly knows the outcome to this debate, but on a positive note, this has been a direct result of Bitcoin’s huge growth and popularity. The technical solutions have been presented, and this is more of a socio-political style debate.

Hard forking Bitcoin at the price it currently is could be dangerous and confusing for people looking to invest or implement Bitcoin into their businesses. If the exchanges have an action plan on how to deal with this then it could be inevitable, as no middle ground has been met within the community.

We may not get a warning that the hard fork has actually happened, and it may not happen. Perhaps it’s better that BCU and BTC go on their own separate journeys, but BTC will still be seen as the true Bitcoin regardless.