IOTA, The Next-Generation Blockchain, Partners With Cisco, Microsoft, and Many More

IOTA, The Next-Generation Blockchain, Partners With Cisco, Microsoft, and Many More

The World is Going Digital!

With the world embracing Internet-based platforms at an accelerated rate, we now find banking, shopping, and even communicating take place via the Internet.

The world we live in today has drastically changed in the last twenty years with the commercialization of the Internet and its advancing infrastructure, enabling humanity to use it in more ambitious and personal ways.

Partnerships With Microsoft, Volkswagen, and Others

Blockchain technology is just the latest chapter in the evolution of the Internet of Things (IoT), and the German-based IOTA Foundation is seeking to push the limits of blockchain tech and data a step further.

The IOTA Foundation is launching a secure marketplace for monetizing data that utilizes its distributed ledger technology. With the advancement of the Internet and the instantaneous nature of today’s society, consumer data has become “digital oil” for businesses that are striving to stay ahead of consumer trends.

IOTA has attracted interest from a wide variety of companies, such as Microsoft, Cisco, Volkswagen, and many others, with IOTA now being amongst Ethereum and Ripple as the leading blockchain-inspired providers for enterprise applications. 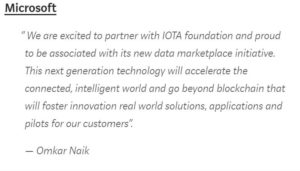 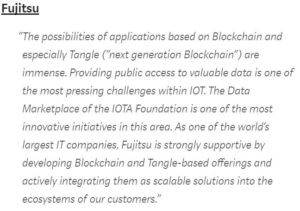 Data is valuable. It is relevant to something and someone, and the IOTA Foundation stated that over 2.5 quintillion bytes of data are produced each day, with the majority of it lost due to the lack of a secure marketplace to house the buying and selling of data.

The IOTA Foundation’s goal is “to enable a truly decentralized data marketplace to open up the data silos that currently keep data limited to the control of a few entities.”

With blockchain technology more popular than ever, numerous solutions have been drafted to tackle the growing network volume on protocols such as Bitcoin, Ethereum, and Bitcoin Cash.

The solutions have varied from larger block sizes and enabling off-chain applications. IOTA does not use blocks, and is not a blockchain. Instead, it uses something called a directed acyclic graph (DAG), more widely referred to as a “Tangle.”

The Tangle eliminates the need for miners and network fees, making the gap between users and validators non-existent. This removes the centralization aspect of the network, a problem that has occurred regularly with other cryptocurrencies.

Each square box in the above diagram represents a transaction on the IOTA network. For every new transaction, two more random transactions are validated in the Tangle.

Until the needed approval threshold is reached, the more a transaction is validated, the more likely it will be confirmed on the network.

As more transactions occur on the network, it becomes faster and can handle more volume!

IOTA also has a tradable digital asset (MIOTA) that is currently in the top ten, with a market cap of over $3 billion and trading at $1.40 at the time of writing.

The recent months have been highly volatile for “the next-generation blockchain,” but a recent price rally based on the productive news and developments has made up for lost ground.

IOTA’s price bottomed out at around the $0.30 range before commencing its bullish price rally above $1.00. Innovative Ethereum and banker’s blockchain solution Ripple have shown us what partnerships with corporations can do for a cryptocurrency’s price.

Can IOTA and the innovative “Tangle” technology revolutionize how data is exchanged? This could be one to watch for 2018, alongside the likes of EOS, Ethereum, and many others!