This week, JP Morgan CEO Jamie Dimon dismissed Bitcoin at the Delivering Alpha conference that was presented by CNBC. Dimon stated it as being valueless and a fraud.

Following after a heavy shakeout of weak hands last week, the previous drop in price was and still is a result of China’s recent new stance on ICOs and the threat of shutting down exchanges.

The fact that the CEO of JP Morgan is labelling something a scam while supporting more centralized blockchain projects (such as Ethereum) does have a taste of irony to it.

Fiat has no value backing it, and after losing value over decades, many people are now seeking more savvy and technology-driven methods to make their savings and overall net value grow passively, rather than using stuffy savings accounts and bonds. 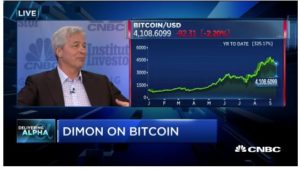 Is This a Subtle Attack on Bitcoin to Manipulate the Price?

As Dimon stated in the interview, “governments and banks don’t like what they can’t regulate or oversee”, which means they most likely don’t like Bitcoin or anything that empowers the everyday person, at least officially. But wouldn’t it make sense for many, such as Dimon, to use their reputations and influence to slow down the bull trend, and perhaps even use it as a chance to buy in cheaper?

After all, this is money, and they seek to make profit just as much as anyone else, so how better to do this than to trigger fear in the markets?

The recent stance on ICOs could work well for Bitcoin, as the regulations eliminate competition and capital will flow back into Bitcoin. However, a new wave of bad news hit the community regarding exchanges closing, which caused further price drops!

Earlier this month, Bitcoin reached an all-time high of $5,000. It now trades around $3,300 – $3,400, with almost every other altcoin yielding losses of 10% or more as well. Many are speculating that we could possibly see $2,500 again before seeing a rebound!

Despite the bad news, regulations, and hypocritical bankers, Bitcoin and any other decentralized altcoin cannot be compromised directly.

Yes, exchanges can be shut down and the price can be influenced by bad news, but the software itself cannot be stopped.

This is something power-hungry institutions and governments are simply going to have to get used to. The likelihood that many of these figureheads with influence own some cryptocurrency privately is quite high because as stated earlier, they want to make profit as much as anyone else!

Bitcoin veterans are used to such headlines and events taking place. The reality is that the majority of new users to blockchain technology have never seen a bear market in cryptocurrency and run back to fiat at the first sign of trouble.

Regardless of what people’s opinions of cryptocurrencies are, the underlying technology the blockchain is being built on is being supported by the very institutions that label it as a scam!

Maybe the entire crypto community is yet again being “trolled…”