The pioneer of Bitcoin and cryptocurrencies in general, Satoshi Nakamoto, has been silent for many years now, leading many individuals and agencies to try deciphering just who is behind it all. There have been many theories thrown about, ranging from state actors to groups of hackers and more, with nothing to back any of it up. But now John McAfee, the man behind McAfee antivirus and renowned security expert, has claimed on Twitter that he knows just who Satoshi is – and will be revealing it in a few days if they don’t come forward on their own. 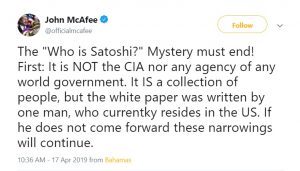 Why Does McAfee Want to Out Satoshi?

In his own words, McAfee has stated that he wants to do this because not knowing “is allowing people to falsely claim the title. This wreaks havoc. For example: Craig Wright’s fake claim to be Satoshi is fully responsible for the BSV scam which hurt us all.” If you’re not caught up with it, BSV has officially been delisted from many exchanges due to claims lodged against Craig Wright and a loss of followers. It’s not the first time someone has claimed to be Satoshi, however, and it won’t be the last – at least until it’s proven exactly who it is. In the case of someone proving they are the true creator, it’s a simple process: they just need to sign one of the early Bitcoin addresses, which will prove that they have the private keys to the addresses only Satoshi had access to in the beginning. 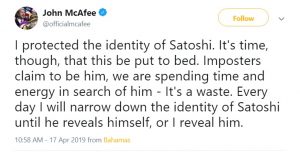 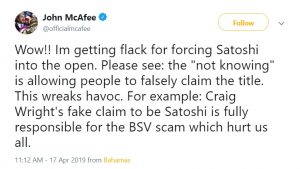 What Happens if He Does Out Their Identity?

At this point it’s hard to tell exactly how McAfee would go about proving the identity of Satoshi. As stated, signing a private key for an early address would be the easiest way to prove ownership/identity for the individual (or group) themselves, but that does nothing for someone, such as McAfee, claiming they can out the identity. This really all boils down to what type of proof is given, where and how it was obtained, and how it can be verified. Whereas private keys cannot be faked, other identifiers can – such as locations, IP addresses, etc. Because of this, the big question isn’t so much what information is given, but rather if we can take it all as being definitive, unrefutable proof.

As to if he does successfully pull this off, it shouldn’t make a huge difference within the cryptocurrency sphere at this point. In the beginning, there were a lot of fears about what knowing Satoshi would do to the ecosystem, but over the years things have strayed a bit further away from him, and that could very well make knowing their identity a nonfactor. If anything, it would simply help in the sense that it would allow for clarifying things with the original creator – after all, a lot of ideas they had have been lost in translation and groups have done their best to interpret why things were or weren’t done and the best path forward (leading to altcoins, such as Bitcoin SV, or “Satoshi’s Vision”).

In any case, this is going to be an interesting event, and we will follow this revelation closely and report on it as more information is brought to light! In the meantime, stand by the mindset that until it is definitely proven beyond any doubt, it should be taken with a grain of salt.