Keeping Up With Bitcoin’s Hard Forks! How Many Versions of Bitcoin Do We Need?

Keeping Up With Bitcoin’s Hard Forks! How Many Versions of Bitcoin Do We Need?

The Power of Bitcoin’s Brand!

Most newcomers to cryptocurrencies often hear about Bitcoin before any of the other coins. Bitcoin is the name that comes to everyone’s minds when thinking of digital money and blockchain technology.

Over the recent months, we have seen some of the most significant changes to Bitcoin’s ecosystem. Perhaps one of the biggest events other than activating the scaling solution Segregated Witness is the controversial hard fork, which triggered the emergence of Bitcoin Cash (BCH) an alternative solution to how many think Bitcoin should have scaled.

A hard fork is where an altered version of the original blockchain is created when a particular block is mined. In this case, the difference was that Bitcoin Cash’s block size capacity was increased from 1MB to 8MB, while Bitcoin (BTC) kept the same block size and implemented a secondary layer, called Segregated Witness, through a soft fork.

As the respective blockchains split, all the previous data up until the point where the fork is triggered remains the same, which includes user balances.

Everyone holding Bitcoin at the time of the hard fork received Bitcoin Cash automatically. Due to certain measures taken (replay protection), the split happened smoothly, with Bitcoin’s price rallying as everyone sought to get “free” Bitcoin Cash. 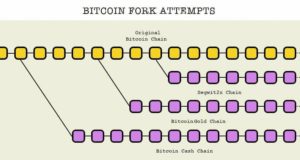 Do We Need Hard Forks? More Chain Splits are Incoming!

It’s not the first time Bitcoin experienced a hard fork, and most likely won’t be the last. Numerous popular altcoins are literally enhanced replicas of Bitcoin, including coins such as Litecoin, Bitcoin Plus, Bitcoin Dark, Gamecredits, Namecoin, and many others.

Hard and soft forks are part of how blockchain technologies work. They aren’t just for creating new pump/dump altcoins, but actually improve efficiency and enhance capacity. Examples of this are the recent scaling solutions being activated through SegWit and when Bitcoin hard forked in its early days due to a software bug that was discovered, enabling miners to generate unlimited amounts of Bitcoin. This was quickly resolved by Satoshi Nakamoto himself, and the only difference is Bitcoin was worth pennies back then, and not thousands of dollars! The stakes are much higher now…

It is inevitable that Bitcoin will hard or soft fork again to meet growing demand at some point in its future, but look at these “forks” as software upgrades!

Currently, Bitcoin faces two more hard forks before the year’s end, and this could also be the reason why we experienced even more all-time highs to $6,000. People are buying more Bitcoin to get more “free” coins… Bitcoin Gold and SegWit2x!

On October 25th, 2017, Bitcoin Gold will apparently be made available to users. Rumours circulating the Internet are that Bitcoin Gold has already split off from Bitcoin’s original chain.

The Bitcoin Gold main net will go live on November 1st, with slight differences to Bitcoin’s algorithm. Rather than the traditional SHA-256 algorithm, Bitcoin Gold will use the Equihash algorithm, similar to popular altcoin Zcash.

During an event in New York, multiple leading businesses from all aspects of the Bitcoin community, making up 85% of the total network hashing power, came together in an agreement to activate Segregated Witness and increase the block size from 1MB to 2MB. This agreement is due to reach its conclusion around November 18th, 2017, which is when we can expect SegWit2x to be activated.

However, with the activation of Segregated Witness and larger blocks on the Bitcoin Cash network, many are now wondering if this is needed. Many claim SegWit2x is a corporate takeover of Bitcoin.

The newly-forked Bitcoin Cash will be forking itself to enhance its protocols and alter the way mining difficulty is adjusted. Many are expecting this to be a smooth upgrade.

Whatever the future brings, if this is truly a free market, we can likely expect more hard forks, not just to enhance capacity or overstep technological plateaus, but to create new altcoins as well.

As always, I recommend safety first. If these new coins don’t have replay protection, you could put your Bitcoin at risk, and even lose them permanently. Do not give your private seed phrase to any unknown software client, and do research before attempting anything!