Kicked Out! Poloniex Delists 17 Altcoins With No Explanation!

Kicked Out! Poloniex Delists 17 Altcoins With No Explanation! 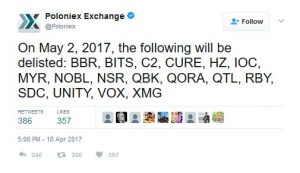 There is rarely a dull moment in the altcoin market, and this week proves no different!

This isn’t the first time Poloniex has removed coins from its wide range of selections, usually due to low volume. Amongst the more popular coins being delisted is ShadowCoin (SDC), which is a privacy coin that has a small following behind it.

The decision has left users in an uproar, as the image from Poloniex’s Twitter shows. In the past, Poloniex has always given a reason for why it delists certain altcoins, which explains the friction by users.

Why Did Poloniex Delist These Coins?

This isn’t the first time Poloniex has delisted coins, with the main reasons being low volume and lack of usage.

Any cryptocurrency with low usage and lack of volume could result in a waste of resources being used to maintain the respective coin’s wallet. Another key factor is that with a lack of trades, no fees would be generated, meaning there is no profit being made for the exchange.

Another reason could be that Poloniex is now attempting to move away from their pump and dump reputation. By removing smaller, more volatile, and easier to manipulate coins, Poloniex may not be the exchange for so much coin flipping.

High levels of volatility and large amounts of funds on risky margin trades present risk and the need for regulation on exchanges similar to Poloniex. This may have swayed the decision to delist with no official explanation.

Will it Happen Again?

The cryptocurrency market changes constantly. New coins are developed, while older ones fade away. Poloniex understands this and needs to stay ahead of the trends. As a business, Poloniex has to provide what the market demands.

If a coin with low volume and no usage is listed, no revenue for the business can be generated from trade fees and users may start looking elsewhere for their newest coin to trade and invest with.

As one of the most popular exchanges for altcoin trading, Poloniex will likely shrug off any backlash from this latest development and will likely repeat the same procedure in the near future, as it’s normal practice to have an “altcoin purge” every now and then!

Keeping any funds on an exchange is extremely risky. Regulations and new laws could affect your ability to access your cryptocurrencies, and there are safer methods for storing your coins without the risk of losing them due to delisting or other last-minute developments.

To avoid losing your favourite cryptocurrencies, it is wise to find out more about the coin, research their Website, and download the official wallet. In doing this, you will minimize the risk of losing your coins and not be at the mercy of exchanges making fast and unpredictable decisions.