Is Litecoin the Next Chosen Coin for Dark Markets?

Is Litecoin the Next Chosen Coin for Dark Markets?

While Bitcoin remains the digital reserve currency on the Dark Web and is still widely accepted as the most common payment option, its lack of ability to provide anonymity means privacy-driven altcoins, such as Dash and Monero, have filled the power vacuum left by it.

However, to the surprise of many, a recent report has stated that Litecoin is set to become the most dominant choice for transactions on the Dark Web, rivaling Monero for the top spot in English-speaking communities.

In the days of Silk Road, Bitcoin was the currency used by all users on its platform. In recent years, many other dark markets have come and gone, including Alpha Bay and Hansa, which supported Bitcoin but also added Monero because of its privacy features via the use of the ring signature protocol.

According to a poll done on a forum, other cryptocurrencies began to gain on Monero, with Litecoin, Ethereum, Bitcoin Cash, and Dash hot on the heels of Monero’s Dark Web transaction dominance. 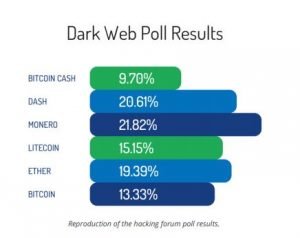 “A poll conducted among several hundreds of members of a popular criminal forum revealed that there is no unified agreement for which currency should be adopted next. Our subsequent research showed that the vendors alone represent the primary deciding factor regarding which payments will be implemented and which will not.” – Recorded Future Report, pages 4-5

Litecoin’s codebase is similar to Bitcoin’s, with Litecoin being dubbed as Bitcoin’s test net, digital silver, and Bitcoin’s little brother.

Out of the myriad of alternative cryptocurrencies, Litecoin and Dash are the frontrunners for being digital cash solutions after Bitcoin itself. Since the revamp of Litecoin and its activation of Segregated Witness almost one year ago, it has become a serious rival to Dash, and even Bitcoin Cash.

Although Litecoin’s transactional privacy is no better than Bitcoin’s, it is technologically superior in speed, cost, and mining efficiency, and this could be what is making it the next big dominator on the Dark Web.

According to the report’s analysis, Bitcoin is still the primary payment option by vendors across the Dark Web, with 30% of altcoin transactions conducted in Litecoin, despite it not being a privacy-driven cryptocurrency. Dash follows closely, with 20% dominance, and Bitcoin Cash is at 13%. 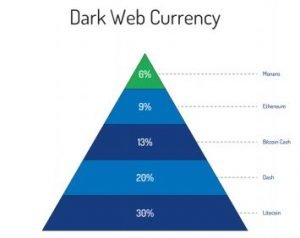 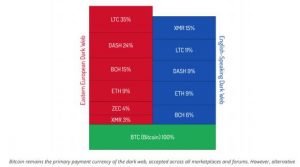 In English-speaking dark markets, Litecoin stands at 11%. With Monero at 15% of altcoin transactions, it seems like we are witnessing an ongoing flippening between Monero and Litecoin in terms of transactional volume!

“On the other hand, Litecoin and Dash will take their place next to Bitcoin as the everyday payment currencies of the dark web.” – Recorded Future Report, Page 7

Across the Dark Web and legitimate markets, Litecoin continues to be the underdog, surprising critics across the board.

The rivalry between payment-based cryptocurrencies will likely intensify as Litecoin, Dash, Bitcoin Cash, and many others scale, innovate, and attempt to win the users and adoption of the masses.

Disclaimer: This is not investment advice, nor is this prompting anyone to use the Dark Web or markets. Please do critical research and only invest what you can afford to lose.