Litecoin is Partying Hard – Will it Last?

Litecoin is Partying Hard – Will it Last?

It’s now official: Litecoin will be activating the long-awaited Segregated Witness and will roll out the Lightning Network shortly afterwards, enabling the payment network to rival the likes of VISA in transaction volume and speed.

Since the early weeks of 2017, Litecoin has pioneered to go where Bitcoin simply couldn’t, with the goal being to embrace SegWit and ultimately test it in order to help Bitcoin resolve its scaling issues. This crucial step forward has put Litecoin, which was once considered a boring coin, in the headlines as price spikes and miner SegWit adoption news slowly enters the Litecoin ecosystem.

At the start of 2017, humble Litecoin was anywhere from the $3.00–$4.00 range. This created hype for traders, investors, and miners alike, as many thought the possibility of SegWit on Litecoin before the flagship cryptocurrency Bitcoin was a strong buying opportunity!

Ultimately, they were correct, as Litecoin now trades at around $14.00, with strong signs of rallying higher! Litecoin shrugged off the Bitcoin-style politics, drama, and scandals to achieve the required minimum 75% threshold of miners signalling for SegWit on the network.

For SegWit to be fully implemented into the Litecoin network and its code, a lock-in period was necessary, which lasted two weeks. Its requirement was a maintained minimum of 75% of miners signalling over the period, which has now been completed, and SegWit is activated. 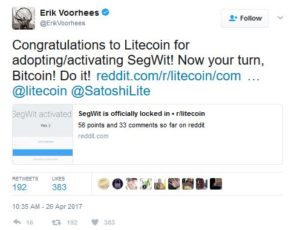 What Will Litecoin’s Price Be Once Activation is Completed?

Although no one truly knows the price of Litecoin once SegWit and the Lightning Network become fully activated, there are many with bullish opinions. Litecoin has increased in value almost four times over since F2Pool and other influential mining pools started signalling for SegWit.

Litecoin is dubbed the “silver” to Bitcoin’s “gold,” and with good reason. As an enhanced duplicate of Bitcoin with subtle differences, high trade volume, and status as one of the most mature and legitimate altcoins, it’s no surprise that people are getting excited.

With increased volume, hype, and more eyes than ever on Litecoin, we could see a very bullish uptrend for the next twelve months as the crypto community curiously watches how SegWit and the Lightning Network run with live transactions and volume.

At first, many thought the price spike was the result of the latest altcoin pump, however, the Litecoin party doesn’t seem to be stopping just yet, despite efforts to weaken the SegWit momentum with the ASIC mining scandal whereby certain miners tried to augment their mining equipment to create more hash power in efforts to signal for alternate protocols against SegWit, bringing down the much needed 75% target.

This did not work, as vigilant users of the Bitcoin and Litecoin network spotted the abnormal hashing power boosts and called out any foul play. This only strengthened the resolve for SegWit to become activated on Litecoin.

Behind closed doors, some of the most influential people in Litecoin attended an eight-hour meeting via WeChat. This was an invite-only gathering to discuss the situation of Litecoin and SegWit.

The meeting ended well, with every pool agreeing to signal for SegWit, pushing the level well above the required 75%, towards 99%. As part of the agreement, once the block size on Litecoin’s network reaches 50% of its capacity, steps will be taken to increase the size from 1MB to 2MB either through a soft or hard fork.

With an agreement reached, Litecoin’s hype intensified and the price reached the $15.00 area. The meeting has helped Litecoin do something that Bitcoin has yet to do: come to a scaling decision and proceed with the unified activation of SegWit and the Lightning Network.

What Are the Possible Risks for Litecoin?

Although code flaws wouldn’t destroy the network or compromise Litecoin, we must keep in mind that there could be setbacks. Although SegWit has been tested thoroughly, there could possibly be unforeseen results.

Possible attacks could be attempted to derail or slow down progress, but again, it’s always productive to consider all scenarios, especially when investing in this type of industry.

The Litecoin party doesn’t seem to be losing momentum and only seems to be attracting more people towards it. The next 12 months will most likely be the most crucial of Litecoin’s existence, and possibly Bitcoin’s!