Despite the cryptocurrency markets taking a beating and investors’ faith in their blockchain investments being tested, there is still some positive news and developments.

Adoption is one of the major challenges blockchain tech faces. Litecoin has pushed boundaries ranging from implementing Segregated Witness to testing innovative scaling solutions, such as successful atomic swap transactions.

In its latest surge of ambitious revelations, two new payment processors have been announced for launch in 2018: LitePal and LitePay! These give Litecoin a critical advantage over rivals such as Bitcoin Cash, Dash, and even its bigger brother, Bitcoin.

“LitePal is a Litecoin-first payment processor. We envision a cryptocurrency world where Litecoin is utilised by merchants from all over the world; one streamlined, simple, less confusing process. Thank you @SatoshiLite for creating the LTC we all love!”

Both of the new payment processors are expected to be open for merchants to use in 2018, with LitePal launching first at some point in Q2 or Q3 of this year.

This will mean Litecoin is a more liquid and accessible asset for users, making it one of the flagship entry points into the cryptocurrency markets. 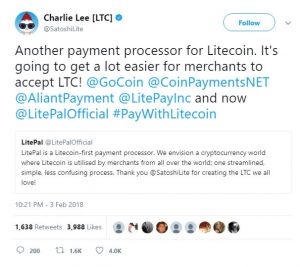 Compared to the other cryptocurrencies, such as Bitcoin Cash and Ethereum, Litecoin has always been a blockchain that tries to shy away from drama and rarely triggers the tribal mentality we often see in the blockchain community as a whole.

Litecoin has a strong ecosystem, maintaining its price well in this sharp market pullback, and it’s often looked at as the affordable hedge against any uncertainty with Bitcoin.

Many underestimated Litecoin for a long time, as it stagnated in the $3.00-4.00 region, writing it off as being too boring for the blockchain space, despite the logical fact that a good store of value needs stability and reliability…

The decision to implement SegWit before Bitcoin showed Litecoin’s ability to stay relevant and be a trendsetter in the space. This ultimately rejuvenated Litecoin’s ecosystem throughout 2017, and quite possibly into 2018 and beyond.

Blockchain tech is not just about making huge gains and buying fast cars – it’s about how it can give the people financial sovereignty and independence while enhancing the current technological barriers in place in an open source, fully usable ecosystem.

Always research before investing, and only invest what you can afford to lose!