One Step Closer to Ethereum 2.0 and “Serenity”

At block number 9,069,000 the Ethereum main net successfully underwent its latest network-wide update in the form of the Istanbul hard fork, which is the latest batch of Ethereum Improvement Proposals (EIPs) introduced to the network as part of the larger shift towards “Serenity,” otherwise known as ETH 2.0, set for early next year.

The Istanbul fork is the eighth hard fork conducted on the Ethereum blockchain. Consisting mainly of six EIPs, the upgrade follows the previously successful Metropolis phase that was split into a two-phase process consisting of the Byzantium and Constantinople hard forks.

Some of the improvements stemming from the Istanbul fork include tackling greater resistance to DDoS attacks, enhanced efficiency with resource costs on various network functions, lower gas fees, and interoperability between Ethereum and Zcash.

The term hard fork is not as scary as it sounds and implies a change of the protocol. When this is altered, it requires all users/nodes to upgrade, as the previous version is no longer accepted or valid on the new blockchain.

We now stand on the precipice of Ethereum’s main objective and its gradual transition from a Proof-of-Work blockchain to a Proof-of-Stake one.

“The first phase of Serenity will see the rollout of the Beacon Chain. The Beacon Chain is a Proof of Stake blockchain and will mark the execution of the long-planned switched from proof of work to proof of stake consensus mechanism.

The Beacon Chain will be stood up and will run alongside the original Ethereum PoW chain, ensuring there is no break in the continuity of the chains.” – The Roadmap to Serenity 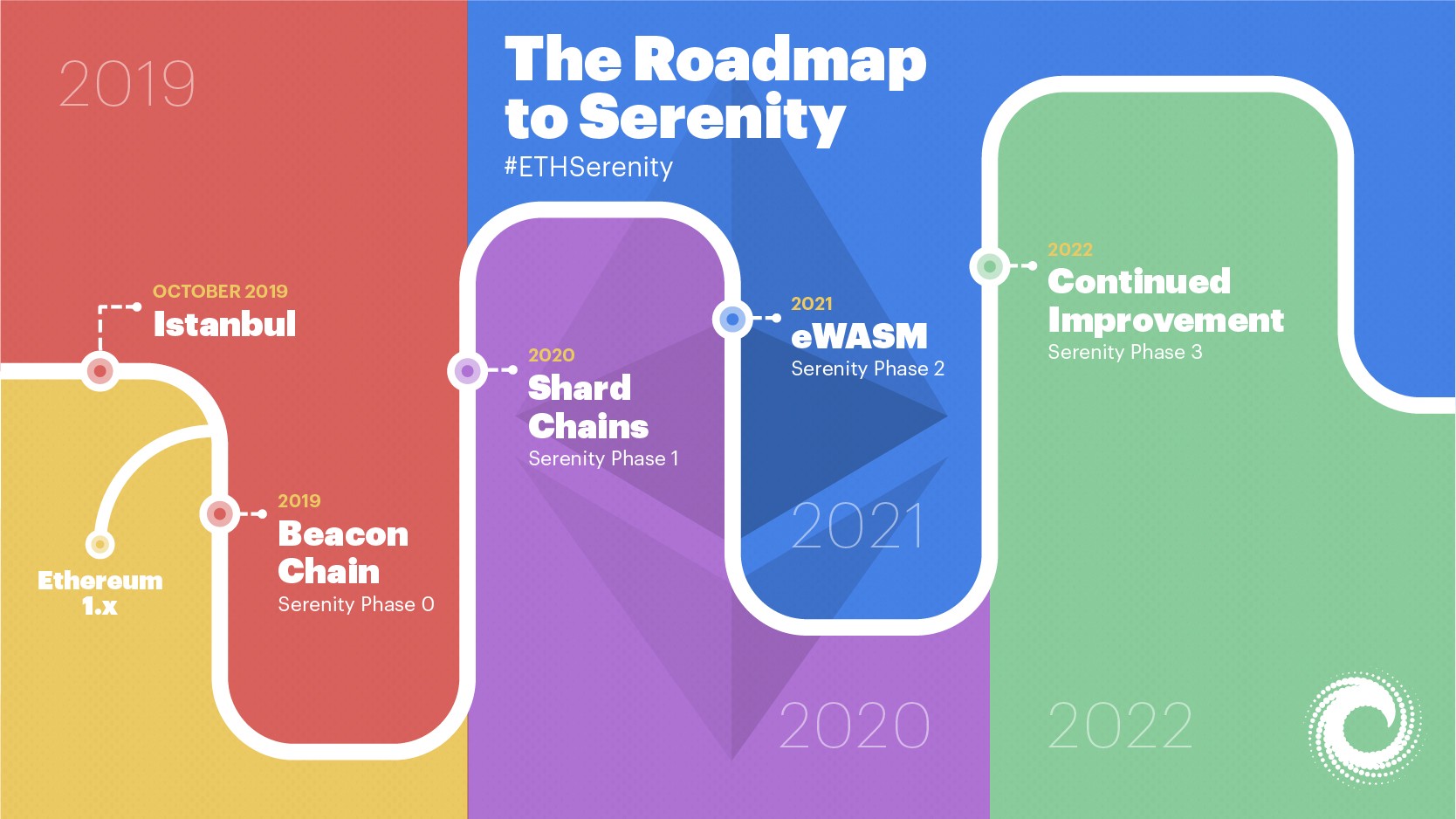 Serenity will be the final phase of this gradual process, giving Ethereum the capacity it needs to remain at the forefront of the blockchain industry by utilizing shard chains for harnessing and processing data at scale.

A powerful version of the Ethereum Virtual Machine (EVM), known as the Ethereum Web Assembly (eWASM), will also be introduced. The eWASM will support a wider range of programming languages than its original predecessor.

Staking will also be enabled on ETH 2.0. Validators will need to own at least 32 ETH to participate on the network. Other blockchains, including Tezos, EOS, and TRON, also allow staking.