Nano – Could This be a Silent Competitor to Micropayment Blockchains?

Nano – Could This be a Silent Competitor to Micropayment Blockchains?

Despite Bitcoin finishing 2017 with a bang, last year was truly the year of the altcoins, with literally hundreds of new blockchains seeking to provide solutions in micropayments, application development, or new and improved versions of blockchain technology itself. 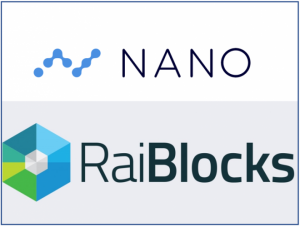 One of the popular and emerging cryptocurrencies that is turning heads is Nano. Launched in 2015, Nano was formerly known as RaiBlocks, which went through a recent rebranding in early 2018 in an attempt to refine its marketing and branding campaign.

Towards the end of 2017, Nano experienced an explosive price increase, putting it in the spotlight and outperforming many other cryptocurrencies percentage-wise. However, since the market pullback at the start of 2018, Nano has not been immune to the cryptocurrency bear market, which put an end to its bull run (for now) and has affected the entire market.

“Launched in 2015 by Colin LeMahieu as RaiBlocks, Nano is a low-latency payment platform that requires minimal resources; making Nano ideal for peer-to-peer transactions.”

What Makes Nano Different From Others?

Its approach to scalability is different than networks like Bitcoin and Ethereum. Rather than using a single blockchain for all transactional data on the network, Nano uses something called the “block lattice,” which is where a user generates an account to send and receive funds.

Each account generates its own blockchain, and each block generated contains one transaction. The global set of Nano accounts (which each contain a user’s individual blockchain) is referred to as the “ledger.”

As illustrated below, every transaction on the ledger generates a send and receive block. Each account has just one blockchain linked to it, meaning that the overall Nano ledger, despite the millions of transactions, is roughly 3GB in size. Compare this to Bitcoin’s network, which is over 150GB and growing. 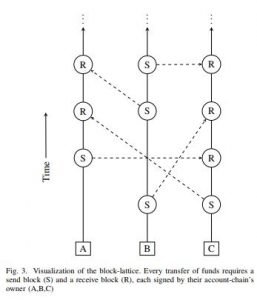 A counter argument is that the Bitcoin network handles a far greater amount of network traffic than Nano, and Bitcoin has also been processing transactions with zero downtime for considerably longer.

Strong Competition in the Micropayment Niche and Building Bridges

Due to the architecture of the Nano network, it is capable of processing over 1,000x the number of transactions Bitcoin does (not including the Lightning Network).

As blockchains face higher fees and slower confirmation times due to volume increases, it becomes harder for cost-effective microtransactions to become fully utilized.

Nano has quickly risen amongst the ranks in recent months, but its biggest challenge may still be ahead. Well-established protocols, like Dash, Litecoin, IOTA, and even controversial Ripple are leaders in being alternative payment solutions to Bitcoin, each of which are further ahead in adoption.

Another factor is whether or not the Nano network can truly handle the increase in volume on a mainstream level on par with established payment providers. It has performed well so far, and this new approach to scalability has turned the heads of many in the cryptocurrency space.

Nano certainly has the capability of rivalling the flagship cryptocurrencies in the years to come. Zero fees, scalability, and efficiency with the size of the network are well-known hurdles most development teams now face with successful cryptocurrencies and their underlying blockchains.

The key to Nano’s long-term success is building relationships with already-established merchants that have access to the masses (such as Amazon, eBay, and other global retailers). With more liquidity and real-world adoption, we can truly witness the full capacity of the block lattice’s efficiency and the features its technology has to offer to blockchain tech and beyond.