Nearing Half a Trillion in Market Cap – The Week Cryptocurrencies Shook the World of Economics!

Half a Trillion in Market Cap!

The cryptocurrencies are stronger than ever. With the total market cap peaking at $450 billion at one point, the long-awaited day of the total cryptocurrency market cap reaching $1 trillion is getting ever closer!

Here at Crush The Street, we reported on the milestones of $100 billion and $200 billion being breached. At the time, SegWit2x was the threat that was creating uncertainty in the markets, but with the cancellation of the controversial fork and Bitcoin futures on the horizon, the cryptocurrency markets exploded.

World Braces for Bitcoin Futures; What Could Happen?

The world, including many self-proclaimed experts, were stunned as Bitcoin, Litecoin, IOTA, and many others reached new all-time highs, making investors the returns that traditional investments would take decades to yield.

Bitcoin took the headlines by storm as it traded at over $17,000 for the first time, and the bullish momentum was also stimulated by news of numerous exchanges enabling Bitcoin futures.

Over the next week, the Cboe Futures Exchange and Chicago Mercantile Exchange will open futures trading for Bitcoin, enabling clients to bet on Bitcoin’s price without having to buy a single coin.

The question on everyone’s minds is where the price will go. The markets are uncertain, yet excited, and many expect the wall of institutional money to attempt to short Bitcoin’s pumped price.

However, attempting to short Bitcoin may not be as simple as many are thinking, as Bitcoin is unlike any other asset seen before. Its price is still unpredictable, and the possibility of clients meeting margin calls is a likely scenario.

The fear of price manipulation via the futures is of concern to the Bitcoin community, with theories spreading across the Internet. One of the theories is that futures traders will be shorting Bitcoin while buying up real bitcoins at a cheaper rate.

In contrast to this theory, the large wall of capital entering could greatly reduce volatility over time, though it may also take several weeks before we see the effects of the futures trading.

Bitcoin was not the only digital asset making waves. Several others made history, including community favourite Litecoin, which reached $120!

The protocol that everyone is calling “the next-generation blockchain,” IOTA, also had an incredible week, with announcements of news with Microsoft, Cisco, and the launch of an innovative and secure data market platform. IOTA reached highs of above $5.00, up from $0.50 in early September, giving early investors near 1,000% gains. 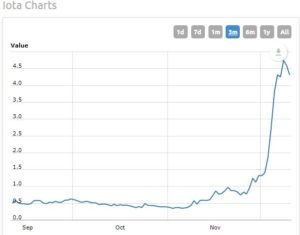 EOS is another protocol with an interesting 2018 ahead of it. Although its ICO does not finish until June, many are calling it the “Ethereum killer.” With news of a beta version of the protocol being made open source (free and available to use), its token’s price entered a bullish price run. 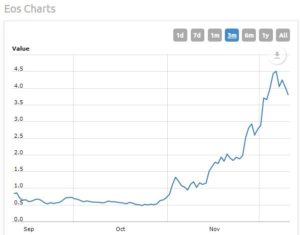 An interesting observation: EOS and IOTA have equally performed and traded at similar prices, and both three-month graphs have a slightly similar pattern.

Asian blockchain NEM’s price rallied by over 100% within hours, as popular Chinese messaging app WeChat is apparently going to be adding a NEM micro-wallet. However, there is no official confirmation on this, and investors should be careful of potential fake news. 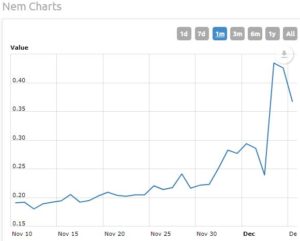 Most cryptocurrencies are down against Bitcoin and up against fiat currencies. Bitcoin has led the journey for cryptocurrencies becoming a viable asset class, and with Bitcoin futures now here, the world has no choice but to accept that digital assets are indeed here to stay and aren’t just restricted to technology enthusiasts.

It’s been an amazing 2017 for the progress of blockchain tech and its passionate community!