June 30th became a day for the record books as Ontology (ONT) officially launched its MainNet Ontology 1.0. With the ONT token previously running as a smart contract on the NEO blockchain, this makes Ontology the latest high-ranking project alongside EOS, Tron, and Tezos to go live.

Many ONT holders automatically received the token several weeks ago as an airdrop by simply holding NEO. For example, if you held twenty NEO tokens, you received two ONT tokens during the airdrop! 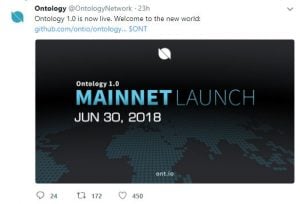 Ontology aims to be a high-performance, multi-blockchain project with three key components within its protocol, using distributed ledger and smart contract technology.

The “Ontology Chain Network” allows multiple blockchains with different use cases and functions to communicate with each other using the Ontology protocol, connecting different blockchains efficiently and at scale.

According to the technical whitepaper, Ontology’s distributed ledger technology is also compatible with its competitors, primarily Ethereum and NEO:

“Ontology and its distributed ledger technology use a decoupled architecture (which is the default for the Ontology Ledger) that can support NEO, Ethereum, and other blockchains as the underlying layer.” – Ontology Technical Whitepaper, Page 7

Another attractive feature for investors and speculators, the new ONT network will have two digital assets, one being ONT and the other being ONG – this is for funding the execution of smart contracts.

Holders of ONT will receive ONG, similar to how NEO holders receive GAS tokens, providing they privately own the funds and private key.

For holders of the ONT token, the MainNet swap means users’ tokens, which were originally running on NEO’s network, will be migrating to the new Ontology blockchain from July 9th onwards.

There are two methods for holders during this swap (please check with your exchange to see if it supports the MainNet launch and token swap!):

Full details on what to do can be found on the official Ontology Medium post regarding the token swap. Please read before attempting to send any tokens.

After a strong April, ONT’s price against USD and BTC slumped during May and June, with the MainNet news doing little to aid the price, likely due to the overall bearish trend that has been sweeping the cryptocurrency markets since the beginning of 2018.

From a technical standpoint, the launch of its own blockchain makes this yet another serious contender that is making real moves forward. It’s already in the top twenty in market cap and brings more vibrancy to the already ongoing battle of innovative blockchains.

Disclaimer: Please do your own research and only attempt to move funds after reading and understanding the official statements published by Ontology developers. Only invest what you are willing to lose; this is not investment advice.