The SEC is Serious When it Comes to ICOs; Here’s a Quick Catch-Up!

Given the insanity of the ICO hype in 2017, it’s no wonder that authorities are now catching up with projects that raised millions of dollars with nothing to show for it. The Securities and Exchange Commission (SEC) has attempted to provide much-needed clarity on digital assets, although critics have stated that the U.S.A. is moving too slow in taking full advantage of the emerging cryptocurrency sector.

If we take a quick trip down memory lane, the SEC made itself known in the digital asset space after its hearing in early 2018 with SEC Chairman Jay Clayton’s statement:

In the months following, more tough stances were issued towards cryptocurrency exchanges, with orders for U.S.-based exchanges to register as national securities exchanges or face strict legal action.

Concerns about whether the SEC considered leading digital assets such as ETH, EOS, and XRP as unregistered securities are also still highly debated on social media.

SEC Vs. Kik and the Kin Foundation

In the latest round of news regarding the SEC’s clampdown, a press release by the SEC announced that the mobile messaging platform Kik is being sued for allegedly running an unregistered securities sale through its 2017 ICO and Kin (KIN) token.

“From May to September 2017, Kik offered and sold one trillion digital tokens called ‘Kin.’ More than 10,000 investors worldwide purchased Kin for approximately $100 million in U.S. dollars and digital assets – over half of this sum coming from investors located in the United States.

However, Kik’s offer and sale of Kin was not registered with the SEC, and investors did not receive the disclosures required by the federal securities laws.” – SEC

Kik and Kin Foundation Fighting Back!

Prior to the SEC’s announcement and complaint filing, the Kin Foundation announced the Defend Crypto fund to contest regulators and gain clarity for digital assets. According to the Website, $4.3 million has been raised at the time of writing. 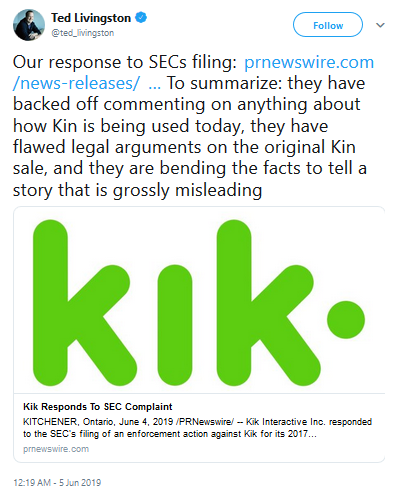 Kik CEO Ted Livingston stated that the company has already spent millions related to the situation and that the SEC is “bending the facts.” Will the SEC back down or will this be a long, expensive legal battle? 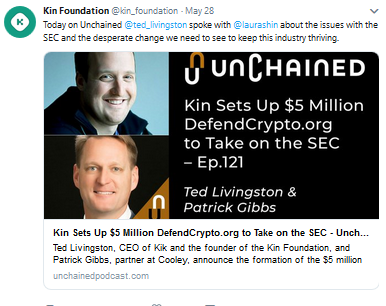 Was Kik Facing Financial Problems Before the $100 Million ICO?

According to the filing submitted by the SEC, Kik and the Kin Foundation violated Section 5 of the Securities Act of 1933. The filing also details that Kik faced severe financial problems and was expected to run out of cash to fund operations by the end of 2017.

“In late 2016 and early 2017, Kik faced a crisis. Fewer and fewer people were using Kik Messenger. The company expected to run out of cash to fund its operations by the end of 2017, but its revenues were insignificant, and executives had no realistic plan to increase revenues through its existing operations. In late 2016 and early 2017, Kik hired an investment bank to try to sell itself to a larger technology company, but no one was interested.

Faced with a shrinking financial ‘runway,’ Kik decided to ‘pivot’ to an entirely different business and attempt what a board member called a ‘hail Mary pass’: Kik would offer and sell one trillion digital tokens in return for cash to fund company operations and a speculative new venture.” – Section 6 and 7, SEC Complaint

The price of KIN has also taken a severe hit, plummeting over 30% upon the release of the lawsuit. This is a bitter example of why it is important to always research an ICO before investing. It’s likely that Kik and the Kin Foundation will not be the last to get a knock on the door by the SEC.

If you are considering investing in an ICO or IEO, verify that the project or company is complying with all applicable laws and regulations.