Poloniex Crypto Exchange to Base Fees on USD Volume

In the cryptocurrency realm, companies are in constant competition with one another. One of the biggest forms of competition has been within the crypto exchanges, with things like hacks and regulation causing a lot of turmoil, not to mention the lack of support some sites have and other issues. Poloniex has decided to make a massive change to their own exchange, changing the way that their fees are calculated. Generally speaking, most (if not all) have always just used either flat rates or have based them on the BTC trading volume. As of May 15th, however, Poloniex will start basing theirs on the USD trading volume.

It really all boils down to two words: “volatility” and “consistency.” The prices of Bitcoin and other cryptocurrencies have been volatile, leading to a bit of an issue when it comes to figuring out estimated fees. For example, buying and selling 1 BTC when it’s worth $100 is vastly different than when it is $10,000. A similar path has been seen with many ICOs and other projects as well, where they are becoming more and more based on fiat values than going with flat crypto rates.

Fees are being lowered across the board. The starting taker fee will now be 0.20%, with the starting maker fee being 0.10%, a fairly big drop from the original of 0.25% and 0.15%, respectively. A chart of the new fees is as follows: 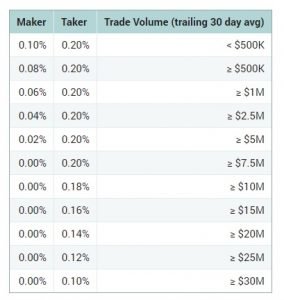 Essentially, the maker fee will now be zero when trading an average volume of $7.5 million per month or more (813 BTC at the current rate as of this writing), but is lower even for those with much smaller volumes.

The Future of Poloniex

As of this writing, Poloniex is the #14 exchange when ranked by volume of trades ($193.5 million traded in the last 24 hours). It has been much higher on the list, even hitting points as high as the top 5-10, but with more competition in the space comes the need for more innovation. These lower fees, while they do mean less income for Poloniex based on their current trade volume, are designed to help bring more big traders in, which should result in more income overall. Tacked on with the ability to trade on margin through their system, it opens the doors for much more volume, therefore bringing in even more liquidity for various altcoins to be traded.

As for whether or not the move to basing fees on USD trading volume, they state that they will “remain a crypto-only exchange for now.” It’s entirely possible, however, that they will end up adding in fiat currencies once the regulation and legislation starts to calm down and it’s easier to see where they stand. But for now, they are taking the safe road and attempting to avoid that area altogether. That said, should they open fiat trades later, we will definitely keep you in the loop, as that could be a game-changer for one of the biggest crypto exchanges available!