Bitcoin’s community is embracing what could be the most pivotal moment in its history since its launch in 2009!

The enforcement of BIP148 is behind us, and with the entire network signalling for SegWit, no real threat was posed. However, it now leads to the very real event of a hard fork, splitting the chain and creating Bitcoin Cash (BCH).

Bitcoin Cash seeks to increase the block size up to 8MB and will not be adding SegWit. Everyone holding Bitcoin will get the exact same amount in Bitcoin Cash. With many users now in a mad panic to buy as much Bitcoin as possible to get more BCH, it has caused Bitcoin to touch the $2,900 mark, with excitement and greed being the key influencers, rather than fear in the markets.

While there is a mixed stance on BCH, most are looking at this as free money. But is this really “free,” and how will it affect Bitcoin’s price in the long run?

As a slice of Bitcoin’s hashing power and capital will split from its economy to become BCH, if one takes a zoomed-out perspective, the capital from BCH is simply Bitcoin’s former capital being redistributed to users.

But looking from a simplistic perspective, it is as free as money can get! Many claim to be selling their “free” BCH back into Bitcoin!

What is the Safest Course of Action?

No one can truly predict what will happen over the next few days, and we have the possibility of seeing up to four different chains exist. At the moment, the safest option is to wait and not be engulfed by greed.

The image below is from my own offline Ledger Wallet, a perfectly trusted and secure company that provides Bitcoin/altcoin offline storage devices. At the time of writing, BCH is expected to split within the next hour. In theory, if I choose a particular chain and then proceed with transactions and the respective chain is rejected or no longer valid, a loss of funds could happen. 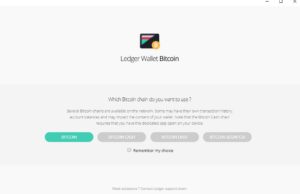 It may be wise to wait before trying to access your BCH. With four chains potentially in existence, the next few days could show potential disruption on the Bitcoin blockchain – whichever one that is!