It is another day in the office for Bitcoin as it smashes past $10,000 and enters the five-figure realm! It’s leaving skeptics, bankers, and even enthusiasts speechless!

If you bought Bitcoin in January 2017, your wealth in debt-based fiat would have increased TEN TIMES (including the hard fork coins you would be entitled to)! This is something no high-street bank can offer, and it even dominates the precious metals and most stocks.

If we take a zoomed-out perspective, we can see that since this bull market began back in early 2016, Bitcoin has had consistently higher levels of price support. Despite the fears of government regulations, JP Morgan CEO Jamie Dimon’s manipulation attempts, hard forks, scaling drama, and even hashing power wars, the bull market has not been broken.

What Can 2018 Bring if 2017 Has Accomplished So Much for Cryptocurrencies?

Despite the long list of potential catalysts to the death of Bitcoin, 2017 has shown us how resilient blockchain technology can actually be and just what this ecosystem is capable of in the long-term.

Many analysts are predicting Bitcoin to reach $27,000, and with the steady development of protocols such as Ethereum, Ripple, and EOS, the possibilities are almost limitless.

The altcoins are poised to enter 2018 on a high as we see a breakout from a stagnant couple of months.

Digital silver, Litecoin, trades for an impressive $99.00 at the time of writing. This time last year, the little brother to Bitcoin traded for a humble $3.00-$4.00! 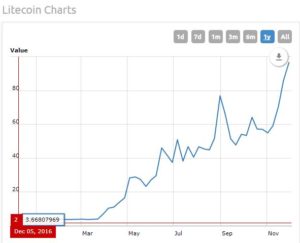 Litecoin has an ambitious roadmap for 2018 and beyond, as it has already completed a successful atomic swap payment with Bitcoin and seeks to add a privacy feature and other off-chain applications in the future.

CME Group will be adding Bitcoin futures in the coming weeks, enabling institutional money to place bets on Bitcoin’s price. Many are against this because it opens up the possibility of price manipulation. This is similar to what we see with gold and silver, which should be rallying in price as purchasing power diminishes in fiat currencies.

With $10,000 reached before the end of the year and a wall of institutional money waiting to enter the space, 2018 could possibly be the best year for cryptocurrencies yet.

Fiat is dying. Its purchasing power has diminished since both World Wars, governments cannot be trusted to manage money, and cryptocurrencies overall are being taken more seriously as assets.

If Bitcoin can achieve prices in the five-figure range in less than a decade of its creation, have a market cap nearing $200 billion, and still not be mainstream, these could still be the early days for new investors and businesses entering the space.