If you think the price decline going on in Bitcoin right now is precipitous, take a look at a Litecoin chart. It wasn’t too long ago, in mid 2014, when the Litecoin price was hovering around $10. After piggybacking off the success of Bitcoin and riding that early crypto wave, the silver digital currency now sits an at uninspiring price point of $1.27 at the time of this writing.

When searching for reasons regarding the tremendous price decline, go no further than accepting the simple fact that Litecoin is a leveraged play on Bitcoin. Much like silver’s volatility to gold’s relative stability, we have a similar type relationship (kind of) with the two primary cryptocurrencies. When Bitcoin goes up, Litecoin goes up more. When Bitcoin goes down, it’s “look out below LTC”.

So what does this mean for Litecoin’s future? Well, on a positive note, Litecoin can process transactions at multiples faster than Bitcoin and it’s the most liquid of the digital currencies. And, its associated with Bitcoin…so if you think Bitcoin is going to make it Litecoin will probably persevere as well, with higher percentage gains to boot.

The bad news is that merchant adoption remains low in addition to feeble public awareness. The world community more or less knows about Bitcoin at this point but Litecoin remains a mystery, known only to those probing the outer reaches of the world wide web. Without visibility and brand recognition, Litecoin will remain the little speculative brother of bitcoin who could never get ahead.

With that being said, being the “silver to bitcoin’s gold” isn’t necessarily a bad thing, especially if you are a speculator. If you’re a true believer if crypto, Litecoin remains the best way to leverage your exposure to the upside. If you have some slush fund money laying around that you can afford to lose, LTC isn’t a bad bet at this price point. Risk is the lowest it’s been in quite some time and the upward inertia of “to the moon” remains in play.

Choose your crypto destiny wisely though, as these are the real uncharted waters. Don’t bet the bank and hang on every price movement. Hopefully when you look at prices a year from now it vindicates your crypto wager as one of the wisest on the street. 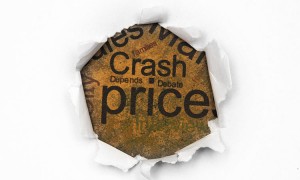 If you think the price decline going on in Bitcoin right now is precipitous, take a look at a Litecoin chart. It wasn’t too long ago, in mid 2014, when the Litecoin price was hovering around $10.