No One is Safe! Bitcoin User Arrested Over Transaction!

No One is Safe! Bitcoin User Arrested Over Transaction!

On February 9th, 2018, Morgan Rockwell was arrested in his own home for a Bitcoin transaction dating back to late 2016.

The reason for the arrest was selling Bitcoin for cash, and although he is currently released under a personal recognizance bond, Morgan is being charged under section 18 USC 1956 – Money Laundering Instrument.

Morgan’s court appearance will be on February 22nd, 2018 at the Edgar J. Schwartz building in San Diego. 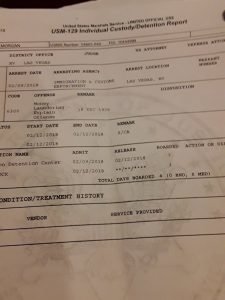 Due to the charges given, Morgan faces legal fees of over $150,000, with accusations of money laundering. This is not the first time an individual has been targeted for using digital assets and flagged as breaching anti-money laundering requirements.

Are users of cryptocurrency going to be forced to submit transactional data if they used third-party exchanges, such as Coinbase?

If this is a requirement for many users of cryptocurrency who have already exchanged their digital assets for government-issued cash, we may see a wave of arrests as 2018 unfolds in an attempt to clamp down on everyday people and start-ups that are creating wealth that does not require dependency on Big Brother… 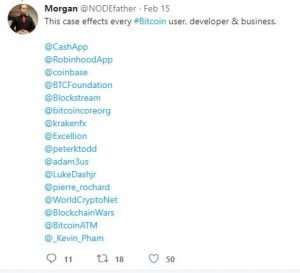 According to www.fincen.gov, some form of data may need to be submitted to authorities, but as cryptocurrencies are not restricted by borders and are ultimately nationless, the confusion regarding them intensifies.

“Certain money services businesses (MSBs) have been required to register with FinCEN since 1999, when the MSB regulations first went into effect. An entity acting as an MSB that fails to register as required is subject to civil money penalties and possible criminal prosecution. The registration of the MSB serves as a first step in establishing the compliance framework for applicable FinCEN regulations designed to help mitigate the risks of criminal abuse of MSBs for money laundering and terrorist financing as the MSB seeks to provide financial services to customers for legitimate purposes. There is no cost for registration, which is a simple procedure explained in detail on FinCEN’s Web site at https://www.fincen.gov/money-services-business-msb-registration.”

As cryptocurrencies are taken seriously by financial powers, we’ve seen the emergence of the BitLicence.

Issued by the New York State Department of Financial Services, the licence is a requirement for cryptocurrency-based businesses that brings similar regulatory rules to those of brokerage firms as a blatant attempt to control the innovative growth of the emerging blockchain sector.

Bitcoin is for the People – Not the Government

Bitcoin was developed to be an open source network, without the need for any third parties to regulate or manipulate operations within. If this new licence spreads to other states or other nations adopt similar laws, it could drive out start-ups from the respective countries and push innovation to locations where the laws are not so harsh.

This is ultimately something every user of cryptocurrency should take heed of, regardless of which country they reside in.

As Bitcoin and the blockchain industry in general continue to grow, authorities will begin to take more action, possibly enforcing the new BitLicence. Please research and consider the legal implications when investing in cryptocurrencies – it is not worth going to court or prison over.

Trusting third-party exchanges may not be the best idea, as they are the first in line for regulatory crackdowns (due to being a crossroads for cryptocurrencies and fiat currencies). If prompted, they can give up your transactional data without your consent.

We will keep you posted on Morgan’s case as it progresses, and you can also follow him on Twitter.