Was the SEC/CFTC Hearing Positive Towards Cryptocurrencies? Are ICOs the Target?

Was the SEC/CFTC Hearing Positive Towards Cryptocurrencies? Are ICOs the Target?

The long-awaited SEC and CFTC hearing regarding cryptocurrencies was embraced with caution and uncertainty. The markets echoed this, with the price of Bitcoin briefly dipping below $6,000, as the industry feared the worst. 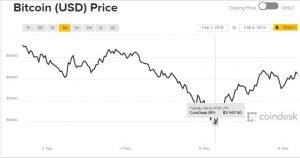 However, to the surprise and relief of many, the hearing was a positive one, with officials carefully acknowledging blockchain technology as intrinsic and stating that the industry must be allowed to evolve respectfully.

Cryptocurrencies and ICOs: Where is the Line Drawn?

While the SEC and CFTC have made it clear that there WILL be some form of regulatory implementations on digital assets, the ICOs are the primary focus of the regulations.

“At the same time, regardless of the promise of this technology, those who invest their hard-earned money in opportunities that fall within the scope of the federal securities laws deserve the full protections afforded under those laws. This ever-present need comes into focus when enthusiasm for obtaining a profitable piece of a new technology ‘before it’s too late’ is strong and broad. Fraudsters and other bad actors prey on this enthusiasm.”

This was met with positivity overall. ICOs dominated the cryptocurrency markets in 2017 as a way for investors and projects to make substantial returns and generate huge sums of capital for projects. The downsides of this were that the founders of projects were holding the bulk of distributed tokens, and there was rampant price manipulation and outright scams.

Positive examples of ICOs include Ethereum, Stratis, and several others that have delivered huge growth to investors and are capable of huge, innovative accomplishments.

ICOs seem to be the target of authorities due to the promised investment returns and services. Something that wasn’t mentioned much was tax law when it comes to cryptocurrencies.

In conclusion, the takeaway is that authorities take blockchain tech and everything it has to offer extremely seriously, but also respect the simple fact that innovation cannot be stopped, as CFTC chairman J. Christopher Giancarlo stated.

“As we saw with the development of the Internet, we cannot put the technology genie back in the bottle. Virtual currencies mark a paradigm shift in how we think about payments, traditional financial processes, and engaging in economic activity. Ignoring these developments will not make them go away, nor is it a responsible regulatory response.”

The CFTC chairman also referred to his own personal experience of cryptocurrencies, and even used popular cryptocurrency terminology such as “HODL” (hold on for dear life), stating that his own daughter was more interested in Bitcoin than the stock markets!

While it was admitted more could be done to protect investors from fraudulent ICOs, it is quite clear from the hearing that cryptocurrencies and legitimate ICOs are here to stay and could truly disrupt the way we invest, send value, and build the Internet 2.0. 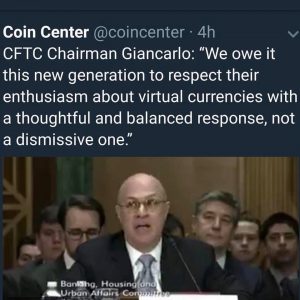