Despite Bitcoin hitting $3,000 almost a month ago, the markets have witnessed a series of corrections in price as Bitcoin tries to shrug off fears of uncertainty regarding the implementation of SegWit over the coming weeks ahead.

Over the last week, Bitcoin has traded anywhere between $2,300 and $2,600, a price many dreamed of twelve months ago.

A large number of users are hedging into altcoins such as Litecoin and Ethereum to receive high returns. Others are taking profit into fiat, while many simply hold their Bitcoin privately for the long-term off the exchanges.

Take a Zoomed Out Perspective! 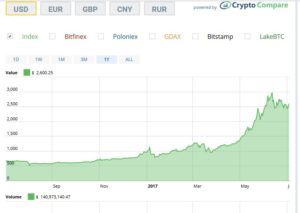 Despite profit-taking or fears regarding the implementation of SegWit, Bitcoin looks incredibly healthy on a 1-year chart, with each correction being the precursor to further bullish behaviour. Bitcoin seems to have found support around the $2,200 region, which could be a great launch pad for going after another all-time high!

But what happens when SegWit is added?

Either Way, Bitcoin Will Have SegWit!

Bitcoin will have SegWit activated. There will be a version of Bitcoin running with SegWit implemented no matter what. It wasn’t long ago that Litecoin trailblazed where Bitcoin is still trying to go. The activation of SegWit injected life back into the altcoin and its price now trades for over $40. Before SegWit, Litecoin was bought and sold anywhere between $3.00 and $4.00.

It is evident that the markets want SegWit activated on Bitcoin’s network. With it, Bitcoin would be more capable of adding off-chain features, such as the Lightning Network, and the network would have much cheaper transaction fees and the ability to build Smart Contracts.

The only problem regarding the activation of SegWit is which version will prevail: BIP148 (User-Activated Soft Fork) or SegWit2x, which involves a 2MB hard fork scheduled for later this year. Many in the crypto space have conflicting opinions on both sides of this latest development in the long debate.

As stated above, SegWit enables Bitcoin’s network to do so much more. With higher capacity for innovation, the more the software is worth (in a logical world) with users wanting SegWit and a way to send funds on Bitcoin’s network with lower transaction fees, we could potentially see a huge rally in Bitcoin’s price.

Those stocking up on altcoins in fear of Bitcoin’s problems will likely scramble back in to ride a price surge as confidence returns to Bitcoin’s ecosystem and businesses begin to once again embrace Bitcoin not only as a payment system, but as a means to build applications and innovate.

By looking at Litecoin’s progress since activating SegWit, it highlights what the markets demand and will be received in a positive manner throughout the blockchain community. However, the celebrations may become short lived if SegWit2x prevails, as it still involves a hard fork that could cause yet another time of uncertainty for the community!

No one can truly predict how the markets will react, and this entire space is still new grounds for even the brightest minds. As exciting as this innovation is, it’s always wise to only invest what you can afford to lose!