Is SegWit Finally Going to Activate for Bitcoin? BIP91 to the Rescue! What You Need to Know…

Is SegWit Finally Going to Activate for Bitcoin? BIP91 to the Rescue! What You Need to Know…

The scaling debate reached another phase and a crucial point in the trajectory of Bitcoin and blockchain technology overall.

On August 1st, BIP148 (User-Activated Soft Fork) activates and Bitcoin will likely split, something the community wants to avoid. In order to avoid this and smoothly activate SegWit with minimal disruption, BIP91 has been introduced as a combination of SegWit2X and BIP148 to push in front of BIP148 before August 1st and activate SegWit without a chain split.

In order for this to happen, BIP91 needs 80% of the nodes to signal for its activation to ensure it “locks in.” Fortunately, the majority of Bitcoin’s network has quickly responded to this, and at the time of writing, the required 80% has almost been reached. 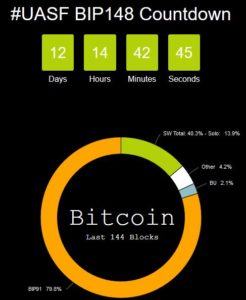 We could potentially witness BIP91 activating in a matter of days, providing the 80% minimum is maintained.

There have been many BIP(Bitcoin Improvement Protocols) over the past months:

BIP148 Was the Motivator Bitcoin Needed!

Although we are not out of the woods yet and anything can happen, BIP148 was not a deliberate proposal to cause carnage on the Bitcoin network, but rather an incentive to unify and find a compromise around the deadlock between numerous factions in the Bitcoin space.

If no resolution is reached, BIP148 will activate, and we have Bitcoin with SegWit, regardless of the political and emotional stalemate Bitcoin is in.

What is BIP91? Is it Still SegWit? Do We Still Hard Fork Later This Year?

However, due to the deadline of Aug 1st (BIP148), many are focusing on activating SegWit smoothly first before tackling the possibility of a 2MB hard fork!

BIP91 uses the same deployment methods as BIP141 (the original SegWit proposal), with some slight differences of the required activation. The threshold is 80%, rather than 95%, and miners are required to signal with Bit 4 rather than Bit 1.

Once BIP91 locks, it will enforce SegWit, similar to how BIP148 would, and Bitcoin will have SegWit activated.

Nothing is Guaranteed in Bitcoin. What if BIP91 Doesn’t Maintain or Reach 80%?

We are still in a cautious time, and despite an upturn, the markets also reflect this. If BIP91 does not go through and activate, Bitcoin will most likely split, giving rise to new contingencies and variables to where Bitcoin goes in the future. 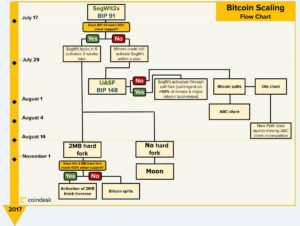 Over the next few days, we will know which BIP will prevail and in which direction Bitcoin will continue in.

Images by XBT.eu and Coindesk.