The Long Wait is Finally Over! 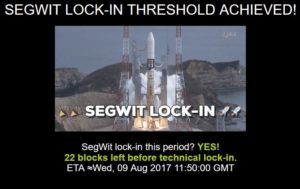 On August 8th at around 20:00 GMT, SegWit finally locked in. This means the Bitcoin network will have Segregated Witness activate on Monday, August 21st 2017 a two week grace period is given to allow Miners time to upgrade and prepare for activation.

This comes as another huge relief for Bitcoin enthusiasts, with the dreaded hard fork having little effect on Bitcoin’s network and price despite many in the space creating FUD around the topic.

SegWit locking in caused the price to spike yesterday, which highlights the fact that the free market is clearly bullish for this development. Bitcoin currently hovers at $3,414 at the time of writing.

Some analysts suggest that Bitcoin could reach $4,000 — or even $5,000 — by the year’s end due to the activation of SegWit, however, SegWit itself isn’t the solution to Bitcoin’s scaling problems.

Although SegWit makes more efficient use of the current block size by moving the witness data to a smaller block (also reducing network fees), it enables off-chain applications like the Lightning Network to be built on top of its network, which will be able to manage the micropayments.

With the Lightning Network enabled on both Bitcoin and Litecoin’s blockchains, users will be able to send funds from one chain to another directly, something Litecoin Investors are also bullish on.

SegWit2x the Next Hurdle?

Despite the recent hard fork, Bitcoin may still face another hard fork if the New York Agreement sticks, in which the fork will be to 2MB, rather than Bitcoin Cash’s 8MB limit.

Another version of Bitcoin could potentially split off, although the chances for the time being are incredibly slim. With SegWit enabled, a hard fork may not be necessary.

Bitcoin Cash (BCH), in the meantime, will have to prove itself and show larger blocks are the way forward. The same rules apply to SegWit, although Litecoin and various smaller cryptocurrencies have activated SegWit with no difficulties as of yet.

The free market will decide who prevails, but for the moment, SegWit on the original Bitcoin chain has given its community something to be bullish about!