Bringing Businesses to A.I. on the Ethereum Blockchain

Blockchain project SingularityNET is now a step closer in its plan of marrying blockchain technology and machine learning together by launching the beta version of its decentralized A.I. marketplace. Running on the Ethereum protocol, users can now access the platform.

“Enabling anyone to access and utilize AI services from anywhere, and by unleashing the creativity of AI developers from all over the world, SingularityNET will be the bedrock upon which the powers of AI will be democratized.” – SingularityNET announcement

Artificial intelligence is a topic I covered throughout 2018, theorizing on how it defines humanity in the future and its shared history with the Internet itself!

As described in the quote above, the goal of the SingularityNET is to create an open platform for individuals and businesses to acquire machine learning algorithms that would normally be exclusive to those who dominate Silicon Valley.

Anyone seeking A.I. services will be able to use the native AGI token to purchase services on the platform, creating a digital economy that can benefit potential users across the globe in a democratic manner.

“Combined with key technologies such as the Internet of Things, Big Data Analytics or blockchain, AI has the potential to create a new basis for economic growth and to be a main driver for competitiveness and job creation.”

This could just be the beginning, as artificial intelligence and machine learning are expected to contribute up to €13.3 trillion towards the global economy by 2030, according to a report by the European Commission!

Artificial intelligence is an extremely broad term to describe such a complex topic. As explained in a previous post, there are different categories of A.I. based on the required tasks for the hardware and software and its level of competence.

The future continues to look bright for A.I.-powered projects and platforms. While the singularity is still some time away, machine learning still pushes the boundaries of the technology. 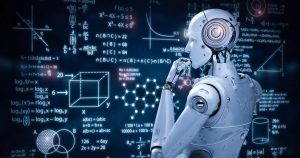