Social Media on the Blockchain

The Steemit network has truly shown us the potential of blockchain technology. While Bitcoin’s blockchain is used for settling payments, Steemit enables users to post content on its platform without the need of a third party (like Facebook or Twitter) authorizing or storing the information.

One of the most popular features of using the Steemit platform is that content creators can post content and get rewarded in Steemit and Steem Dollars, the native cryptocurrencies of the Steem blockchain! 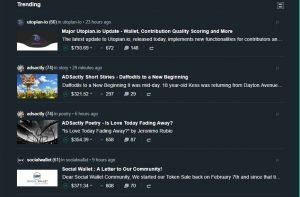 Several variables can make your content rank higher and increase your rewards. Users with large amounts of Steem Power will have a greater influence on the network and are able to upvote your work with a larger effect. Other factors include comments, sharing (re-Steeming), and good keywords, similar to most other social platforms and Websites.

While many use Steemit for blogging and sharing information, its blockchain can be used to provide similar services to YouTube and enable people to share video content, such as vlogs.

Also powered by the Steemit blockchain and Steem cryptocurrency is DTube, a video sharing alternative to YouTube where users can again be rewarded with Steem.

DTube became a viable, decentralized alternative for content creators since YouTube began bottlenecking advertising revenue and flagging (or even removing) videos with no valid reason.

Many channels on YouTube with large followings and outside the box thinking have seen subscribers go down, videos not ranking, and even the channels themselves being permanently removed!

Censorship is Becoming a Problem

As the mainstream media attack alternative media and grassroots projects, decentralized content creation platforms have become more important than ever.

By utilizing the blockchain’s incorruptible ledger, “bad actors” can be kept in check. A Steemit account cannot be removed like a Facebook or Twitter account can, and centralized companies are open to becoming compromised and losing private data of users due to breaches of security.

Steemit has set an example for social media to follow, just like how Amazon, Airbnb, and even Bitcoin make their closest established rivals redundant. Steemit gives us a glimpse at the future of how we will likely be exchanging and contributing information in the future.

Steemit is One of the Only Blockchains Being Used for Something Other Than Speculation!

If the masses truly embrace blockchain tech and cryptocurrencies to the extent that everyone hopes, could there be an Internet 2.0 built on a blockchain? Steemit’s user volume outweighs Bitcoin’s and Ethereum’s combined, with zero downtime. As we have seen in recent months, scalability is a key issue for blockchain technology, and Steemit is one of the only blockchains being used for something other than speculation!

Steemit is setting the pace: its potential is highly underestimated and it is still relatively unknown to the masses and severely underpriced as a valid competitor to Facebook and others.

Facebook encourages users to get their content liked to feel accepted and adored. Early Steemit users are getting upvoted and are earning a tradeable digital asset every time they share their thoughts, insights, and creativity with the world!