Ethereum has been a major influencer in the blockchain sector. Popular for its innovative ability to run additional tokens and applications on its network, many label Ethereum as digital oil.

Peaking over $1,400, ETH’s price has pulled back by 90% in the last twelve months and currently trades at $108 at the time of writing. According to studies, this has prompted some of the largest holders of Ethereum to double down and accumulate while the market panic sells.

A recent analysis by Diar and TokenAnalyst revealed 5,200 active Ethereum “whale” balances are sitting on 80% more ETH tokens than at the beginning of 2018, taking the accumulation strategy to the next level!

The report explains that the 5,200 active addresses “have held balances that propped them up within the Top 1000 since Ethereum’s Genesis,” amounting to just under 20% of the total circulating supply of Ethereum. 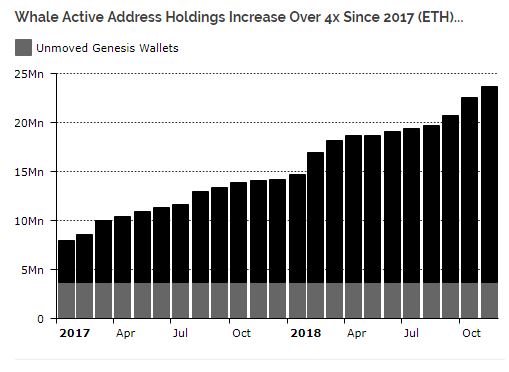 One of the interesting points made in the report mentions the high chances of active traders and investors selling their positions in ERC-20 tokens. Many popular ICOs in 2017 developed their own digital tokens using Ethereum-based smart contracts, such as ERC-20.

These tokens were often purchased using ETH. In most cases, these tokens running on the Ethereum protocol lacked liquidity and only had trading pairs with ETH on much smaller exchanges.

“Over 20% of cryptocurrencies that remain listed on major exchanges have less than 90% of the trading volumes they witnessed at peak hype in January. More than half of those are effectively dead in the water with no traders looking to buy.” – Diar Exchange Volume Report

While the value has plummeted in dollar terms, the number of Ethereum “whale” addresses has also dropped 30% compared to the start of the year. However, active traders are accumulating or at least realizing profit from other tokens within the Ethereum ecosystem. 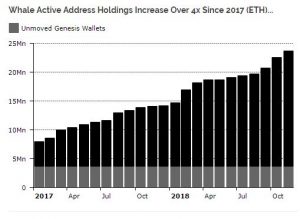