An ICO to End All ICOs!

Encrypted messaging application Telegram, created by the Russian entrepreneur Pavel Durov, is set to launch its own blockchain platform (TON), with the first round of its ICO resulting in $850 million already being raised, according to a document submitted to the SEC.

To highlight the potential market cap of this project (if it succeeds), the capital raised from the pre-sale amounts to $850 million, with a public sale supposedly launching later in 2018.

According to rumors on forums, the first pre-sale only consists of 81 investors, with further speculation of a second private pre-sale, which is set to raise a further $850 million before the public has a chance to contribute later this year!

This already makes TON the biggest ICO to hit the blockchain space so far, dwarfing the other powerhouse ICOs, such as Tezos, Filecoin, and the ongoing ICO for EOS. 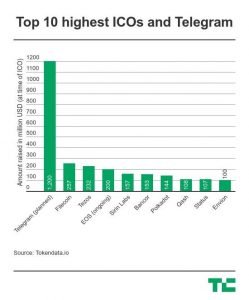 What Will TON Bring to the Blockchain Space? Internet 2.0?

TON, which is believed to be named “The Open Network” or “Telegram Open Network,” seeks to provide a more efficient version of blockchain technology, with the usual claims every new blockchain project makes: efficient transaction capability and a fully-scalable network.

Many have voiced their concerns regarding the secrecy and procedure in the launch of TON, with one Reddit user comparing it to Ripple and Bitconnect!

Despite the critics slamming the TON project, according to its technical whitepaper, smart contracts will be used to create a potential Internet 2.0 within the TON blockchain:

“4.3.1. TON DNS: a mostly on-chain hierarchical domain name service. The TON DNS is a predefined service, which uses a collection of smart contracts to keep a map from human-readable domain names to (256-bit) addresses of ADNL network nodes and TON Blockchain accounts and smart contracts.

Other features we can expect from the TON blockchain include micropayments, data storage, and the ability to interface with decentralized third-party applications. 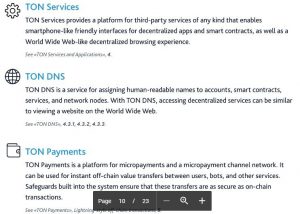 In conclusion, there is still doubt surrounding this ICO. With leaked whitepapers and numerous rumors circling the Internet, it is paramount to do critical research and be wary of something that can sound too good to be true.

However, if the TON blockchain lives up to the innovative claims as highlighted in its technical whitepaper, this could prove to be another innovative competitor to Ethereum’s smart contract market!