Will Zuckerberg’s New Cryptocurrency Pose a Threat to Bitcoin and Leading Altcoins?

Before we start, its important to reflect on how far the cryptocurrency and Blockchain sector has evolved, there was a time not too long ago where users, investors and enthusiast of the emerging technology would be ridiculed and labelled with derogatory terms.

Now and as always; contrarians have proved to be the visionaries as the biggest corporations play catch up and complement Bitcoin and Altcoins by creating their own digital assets to stay relevant.

This is not the first article on Facebook’s venture into crypto and I will keep following this topic closely, future articles on the geo-political impact of this coming soon!

The entire cryptocurrency community nervously waited for the news of Facebook’s new digital asset. On schedule, Facebook didn’t disappoint and released the whitepaper for its very own global currency named Libra!

For over a year, we have been following the developments and relentless rumors of Facebook moving towards blockchain and cryptocurrencies and Zuckerberg’s attempt at utilizing blockchain technology in an attempt to revamp his social media empire!

Although this is a huge step forward for the realm of digital assets, many are now speculating about what ramifications this will have on Bitcoin, XRP, and other popular coins, especially as Facebook has access to over two billion users and data on EVERYONE! 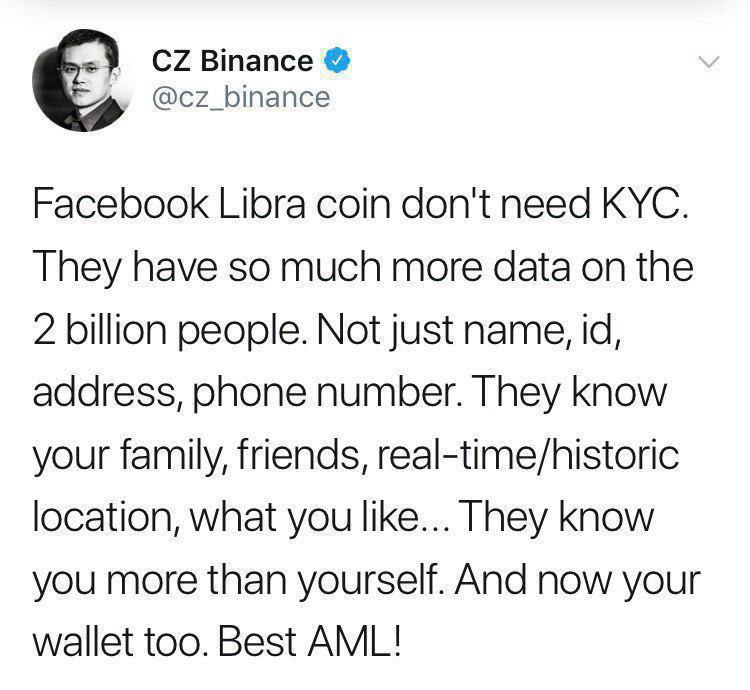 To fully understand if this is an actual threat to flagship cryptocurrencies, let’s take a brief look at the whitepaper and look at the fundamentals behind Libra to identify whether or not it represents sound money.

Libra’s Whitepaper and The Libra Association and Reserve!

According to the whitepaper, Libra will become an “open-source blockchain,” meaning that anyone will be able to build atop of its system to meet his or her requirements, putting the new coin in slightly better light than JPMorgan’s private JPM Coin.

“To enable the Libra ecosystem to achieve this vision over time, the blockchain has been built from the ground up to prioritize scalability, security, efficiency in storage and throughput, and future adaptability.” – Libra Whitepaper, Section 2

The paper also highlights the increasing number of users over the coming years that will gain further access to Libra and its features, but it may not be as utopian as it sounds!

As it states in section two of the whitepaper, Libra will start as a permissioned blockchain. With the goal of becoming permissionless over time, access will be granted to a select few to become validator nodes on the Libra network.

“Essential to the spirit of Libra, in both its permissioned and permissionless state, the Libra Blockchain will be open to everyone: any consumer, developer, or business can use the Libra network, build products on top of it, and add value through their services.

Once the Libra network launches, Facebook, and its affiliates, will have the same commitments, privileges, and financial obligations as any other Founding Member.” – Libra Whitepaper, Section 2

To help make sense of this, Bitcoin is permissionless and anyone can participate and become a miner or run a full node if they have the equipment. This is what makes Bitcoin “trustless.”

The EOS system delegates 21 block producers via a democratic vote. Different practices to governance and consensus are used with different blockchains, making the industry vibrant.

Who will be the validator nodes of the Libra blockchain?

Members of the Libra Association will form the network of validator nodes that operate and maintain the Libra blockchain.

The Libra Association will have dominion over the reserves that keep Libra at a stable price.

This governing entity will be based in Switzerland and will likely possess the majority of authority, reaching consensus within themselves as they oversee Libra’s ecosystem.

The members (listed as “Founding Members” in the whitepaper) include eBay, PayPal, Vodafone Group, Coinbase, Union Square Ventures, and Facebook, which play a key role alongside many other big names. The objective is to have 100 members in the association by mid-2020.

Only the ultra-rich seem to be able to participate, so where’s the “intrinsic” value coming from…?

Unlike some stablecoins in the cryptocurrency sector, Libra is “fully backed,” but it works different from others (more on this later), with a reserve of assets ranging from a basket of certificates of deposit to government securities.

Again, this is according to the whitepaper, and while fiat is not the greatest wealth preserver, this could explain why Facebook was allegedly raising $1 billion in funding several months ago.

The reserve is created with the intention of giving Libra a “stable and intrinsic value.” One of the key reasons why cryptocurrencies have had friction in being integrated is likely due to the high volatility scaring larger payment providers away, an inevitable side effect when new forms of revolutionary money and technology emerge.

Can You Mine Libra? What is it Running On?

Unfortunately, you cannot mine Libra coins like you can with Bitcoin or Litecoin! The new blockchain will run on a Proof-of-Stake (PoS)-type system using the LibraBFT consensus algorithm.

Binance has also released an interesting comparison between Libra and JPM Coin after having matched XRP against JPM Coin months earlier. While a privatized blockchain clone of Ethereum (Quorum) is used by JPM Coin, there are differences with Libra.

Another key difference is that the Libra whitepaper does not acknowledge itself as a typical stablecoin. In fact, it doesn’t mention the word “stablecoin” at all. The Libra Association seeks to use the reserves to create a form of price stability, but not peg it to another representation of value.

Along with this, both of the corporate cryptocurrencies support smart contracts but use different programming languages. As illustrated in the image below, which one will be superior in terms of innovative capability remains to be seen.

Libra Doesn’t Represent Sound Money But Can DISRUPT How We Send Value! Final Thoughts on the Biggest Corporate Cryptocurrency EVER!

Based on the information we now have access to, it seems that the aim of Libra is to create a digital currency system that can be utilized by the masses on a global scale, similar to how Facebook and WhatsApp are.

The Libra Association has likely been closely watching the developments with stablecoins and has instead developed a second-generation version of the concept. While still backed by a diverse array of fiat-driven reserves, it is not pegged to a currency like traditional stablecoins.

Stablecoins like USD Tether could face more of an immediate threat from Libra because it finds its value from fiat more than independent market swings.

Traditional cryptocurrencies will likely benefit from the immediate exposure and seem to be maintaining their current upward price swing in the face of this news. The Facebook platform and its sister platforms have access to billions of people and are known brands around the world. This added volume into the digital asset markets could be record-breaking for the space.

Libra’s savvy interface via messaging applications could provide a smoother interface into the world of cryptocurrencies, but if it’s going to be as distributed, liquid, and decentralized as the whitepaper claims, it could serve as an effective onramp to cryptocurrencies and has huge potential for immediate usage.

While Libra doesn’t have the same sound money fundamentals as Bitcoin or gold, it shouldn’t be underestimated. If just half of the user base of Zuckerberg’s empire begin using this, it could make Libra the most widely-used digital asset on Earth, reshaping the financial and banking landscape but also disrupting the digital asset sector in the process!

With so much to cover regarding this development, a further post or part two to this post will likely come in the following weeks discussing the impact of Libra!