The Federal Reserve’s Review of Cross-Border Payments: “We’re Seeing a Lot of Evolution With Cryptocurrencies”

Can’t Beat Them? Join Them!

The Federal Reserve has recently conducted a webinar and survey of cross-border payments in an attempt to gain insights and grapple with the challenges of international payments in the 21st century.

With almost 700 stakeholders attending the hour-long webinar, some of the key topics included cryptocurrencies, stablecoins, payment transparency, speed, and cost.

As discussed from timestamp 27:00 in the webinar, the eagerly anticipated FedNow payment system could eventually facilitate cross-border payments. It appears FedNow is currently the Federal Reserve’s flagship platform for innovating its payment system’s services.

“I think we’re still very early in terms of the features of that now and we’re doing similar activities to understand readiness in the industry for FedNow, but we’ve certainly heard loud and clear that the industry feels we need to be looking at functionality of FedNow with the long-term.” – Fed Payments Webinar, 28:00

The Federal Reserve Board announced the development of its FedNow payment system several months ago. With an expected launch in 2023/2024, the new platform is designed to provide faster and more flexible payments without the limitations currently being experienced.

Cryptocurrencies and stablecoins (including JPMorgan’s JPM Coin) were also mentioned regularly in the webinar. One of the key hurdles is integrating and converting government-backed currencies into digital ones. 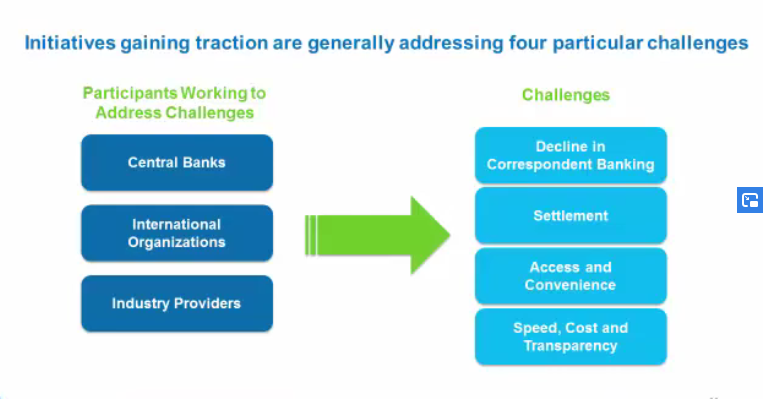 Bitcoin was also slammed as a viable solution for payments because of its technological capacity and turbulent price volatility, a side effect of the emerging forms of currency. No mention was made of Bitcoin’s scaling solutions, such as Lightning Network.

I think that’s why we’ve seen the emergence of stablecoins, which attempt to peg their value to an asset like a basket of currencies.” – Fed Payments Webinar, 34:00

In conclusion, despite the slight criticism of Bitcoin, the overall sentiment towards digital currencies is positive. The Federal Reserve is recognizing the potential of digital assets and blockchain-inspired technology.

“Emerging technologies and innovation, such as distributed ledger technology (DLT) and digital assets (e.g., stablecoin, central bank digital currency) are being explored to address some of the pain points and challenges of conducting payments across borders. However, the systemic impact of these emerging technologies on cross-border payments remains to be seen.” – Fed Payments

A scalable, distributed payment network not only brings enhanced efficiencies for the general population, but also financial institutions that are struggling to innovate at the rate of other industries throughout the global economy.