THE IRS IS COMING FOR CRYPTOCURRENCY HOLDERS! Where are They Getting the Data From?

Letter From the Tax Man!

Crypto and tax has been something that receives mixed reactions. The stance governments take on taxing cryptocurrency users has always been a confusing grey area for retail investors, with differing countries and economic blocks varying in their requirements.

In the U.S.A., the stance has now been made very clear: the Internal Revenue Service (IRS) is sending over 10,000 letters to holders with warnings of severe consequences for those that don’t comply. Late last week, the IRS announced its larger efforts to tax holders of “virtual currencies.”

“Taxpayers should take these letters very seriously by reviewing their tax filings and when appropriate, amend past returns and pay back taxes, interest and penalties.

The IRS is expanding our efforts involving virtual currency, including increased use of data analytics. We are focused on enforcing the law and helping taxpayers fully understand and meet their obligations.” – IRS Commissioner Chuck Rittig, IRS.Gov

As explained on the IRS Website, there are several versions of the letter, with each iteration of the letter being sent based on the type of data the IRS holds on the cryptocurrency holder. The IRS deems cryptocurrencies as property for federal tax purposes.

Images of the sent letters are beginning to appear throughout social media. According to the alleged IRS letter below, the tax enforcers are deeming crypto-to-crypto transactions as taxable and targeting gains within the tax years of 2013 through 2017. 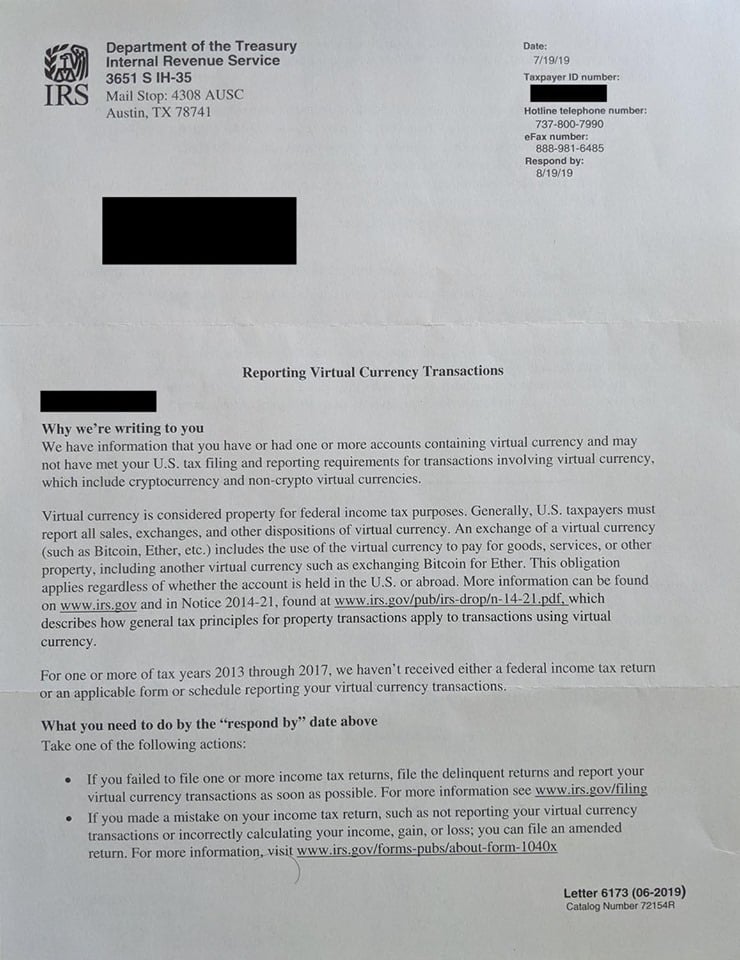 How Did They Get Users’ Data?

This is the important question. It’s likely the IRS is obtaining data of cryptocurrency holders from exchanges who have been forced to comply with not just the U.S. government, but other Western governments as well.

Several years ago, Coinbase and the IRS were locked in a legal battle over submitting the data of approximately 13,000 users after the IRS revealed that less than 800-900 people reported any gains related to cryptocurrencies, which we reported on over two years ago!

“The IRS started sending the educational letters to taxpayers last week. By the end of August, more than 10,000 taxpayers will receive these letters. The names of these taxpayers were obtained through various ongoing IRS compliance efforts.”

There is no official announcement by the IRS that suggests the data obtained from Coinbase was used in this current tax gathering campaign.

The best advice to give anyone holding cryptocurrencies is to always keep a secure record of your transactions and seek professional advice on the current laws your country has in regards to cryptocurrencies and emerging asset classes.