Time to come together for Bitcoin and freedom: let’s compromise with a 2MB block and SegWit

Time to come together for Bitcoin and freedom: let’s compromise with a 2MB block and SegWit

Can a Compromise be Reached?

The debate on which path Bitcoin should be taken down has raged on for months now, with the two main influencers being between Bitcoin Core and Bitcoin Unlimited.

So far, there hasn’t been any resolution. Combined with the pressure of slow transaction times and fees becoming higher, the Bitcoin community is more eager than ever to see an end to the stalemate.

People have taken to social media sites, like Reddit, to thrash out a possible solution, or even a way to compromise so that both sides can move forward. The possible solution some are saying is to merge Bitcoin Core’s Segregated Witness soft fork with aspects of Bitcoin Unlimited’s block size increase.

Community approval would be a must, just like with the current proposal for Segregated Witness. Although not everyone will welcome this warmly, as the post says, it would potentially place Bitcoin in a better position than where it is now, and it could, at the very least, buy some time and avoid any extreme courses of action, such as a hard fork, which could derail and tear Bitcoin apart.

How Could This Work?

By potentially incorporating aspects of both software clients, neither development team wins overall, but a bridge could be built between the two. Unlimited wants to hard fork to unlimited block sizes (within reason), not 2MB, while Core’s Segregated Witness removes a portion of data from each transaction, making it smaller. For data that isn’t removed completely, an extended block would be created for the witness data, allowing the blocks to contain more data for transactions.

If this idea is ever proposed to the community, then the best and most ideal aspects of each version of the software should be implemented. With the Bitcoin community at breaking point, this proposal could be embraced as a refreshing solution.

Would the Community Welcome This?

Would each side be willing to do this? It’s not the first time such ideas have been proposed, so would Bitcoin Core and Unlimited be open to a middle ground? Or will pride and stubbornness rule the day?

With everyone so desperate to have a resolution, a reluctant acceptance of a middle ground where neither side truly wins could be the only option left on the table if SegWit isn’t signalled in time for the deadline. SegWit approval currently hovers around 26% and needs around 75% to become activated.

SegWit’s approval rate spiked towards the end of 2016. Since then, signalling for upgrade has slowed down, adding to the worries of what to do next for the number one cryptocurrency. 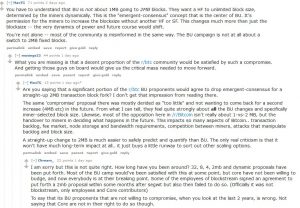 Recently, the largest mining pool, known as AntPool, signalled for the Bitcoin Unlimited version, creating more doubt for SegWit approvers. However, this doesn’t always mean it will be like this, as nodes can switch to signal for either version of Bitcoin as they so desire.

Competition From Other Cryptocurrencies Could Push a Solution Forward

With innovative currencies like Dash taking full advantage of Bitcoin’s divided community and having near instant transactions on their side, this could speed up Bitcoin into making a decision and seeking a way to embrace a compromise in order to solve these problems.

Litecoin, which is often referred to as Bitcoin’s silver and willing test net, also pushes for a SegWit soft fork. At the moment, Litecoin has around 20% of its miners signalling for SegWit to be activated, which is near Bitcoin’s 26%.

Eventually, if competitors gained enough ground on Bitcoin’s market out of fear of losing dominance, Bitcoin may make a decision. One of Bitcoin’s key strengths is its dominance over the entire cryptocurrency market, and if this dwindles, it could leave long-lasting effects.

Perhaps people are overreacting. In reality, none of the alternative coins are being used in any globalized, mainstream manner, and Bitcoin is still the most likely to go mainstream. Whether the ETF gets approved or otherwise, it takes time for new technology to reach solutions in order to scale globally. As the Internet has evolved in speed and usability over the last twenty years, so will Bitcoin.

The sooner Bitcoin scales, the better. All of the blockchain-based currencies will suffer if Bitcoin stagnates!