The value of digital currencies is a hot topic in the cryptocurrency industry, but when it comes to the process of mining, enabling security, and meeting the supply and demand needs of the respective coin, it all comes down to the hashing power.

Hash rate is a term used frequently in the Bitcoin universe. It is used to measure the speed of the machines working on solving complex algorithms that generate bitcoins.

This uses considerable amounts of electricity, and as it gets more difficult to generate bitcoins, more power and speed/hashes are needed.

Higher hash rates mean a better chance of the computer finding the next block and receiving the reward. The harder it is to mine, the more hashing power is needed.

Without hashing power, no coins can be created or secured. High levels of hashing power make it harder for a 51% attack, which is where the majority of the mining power is overpowered and used to halt transactions, effectively causing numerous problems, such as transaction delays or a lack of confidence in the coin. This is a common problem with smaller start-up cryptocurrencies.

What is the Overall Hash Power of the Top 3?

Bitcoin’s hashing power dwarfs its closest rivals. As the chart from Blockchain.info reveals, the rate of growth has trended violently upwards for the last two years, putting Bitcoin past the terahash region and into the petahash region. 1 petahash (Ph/s) = 1,000 terahashes (Th/s)! Bitcoin has reached between 3-4,000 Th/s, which is around 3-4 Ph/s.

The number two cryptocurrency is Ethereum, which also has an upward increase in hashing power, reaching the 11–12 Th/s area.

As Dash increases in popularity, there could be a considerable increase in miners and hashing power

Who is Mining the Cryptocurrencies, and How Much Control Do They Have?

With mining hardware rising in price and competition between miners squeezing out the smaller miners, who exactly is generating all this hashing power?

It’s usually businesses with cheap electricity and large amounts of money to invest in mining hardware. Some of the largest mining pools are located in China, while others are in the United States and various other locations. 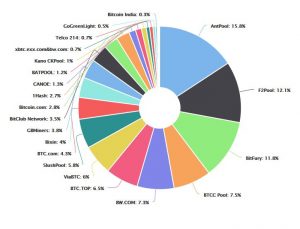 If there are no miners to verify transactions, the result equates to the entire chain coming to a standstill. This is why hash power is an ideal indicator of how successful and long-lasting a cryptocurrency is and can be.

Bitcoin and most other cryptocurrency miners are usually the ones who have primary influence over the destiny of the currency. For example, the ongoing scaling debate between Bitcoin Core and Unlimited, as miners are the ones who essentially keep everything working and have to signal for which version of the software they desire to become activated.

This sometimes leads to traders, investors, and less tech-savvy people to not have a say in the currency they use.

Less Control for Miners With Self-Governance…

Some coins, like the number three coin, Dash, don’t enable miners to have so much control. Instead, they use a self-governance system.

This works by using the master nodes. Each operator of these is given one vote on any decision that may affect the network, e.g. software upgrades or projects that require funding.

By giving investors, traders, and everyday people a chance to equally have a say in important decisions, the playing field with miners that own vast amounts of hashing power is more level.

However, to obtain a master node, holders must provide a collateral of 1,000 Dash to help prevent Sybil attacks.

Mining Will Continue to Be Popular in the Future

As time goes by and more users embrace the blockchain, more miners will be needed to handle the constant increase in transactions, and Bitcoin’s hashing power will surpass Google’s.

Although the master node concept is a brilliant, innovative feature on Dash’s part, it squeezes the smaller operators out. As Dash’s price continues to rally, the master nodes’ minimum requirement of 1,000 Dash may not be as easily attainable as before, which could create a similar problem with only the big Dash holders being able to have a say in important matters.

It seems that mining for cryptocurrencies is staying profitable for the foreseeable future. While issues of fairness and governance continue to rage on between different cryptocurrencies, overall, if miners don’t control the majority of the networks’ hashing power, then their influence is only limited.