A knee-jerk reaction to the controversial crypto exchange Bitfinex and the USD Tether stablecoin has triggered a slight blip in the otherwise new upward trend in cryptocurrencies.

The exchange and stablecoin, which are both heavily connected together, have been accused of fraud and covering up a loss of $850 million by Attorney General Letitia James!

“Our investigation has determined that the operators of the ‘Bitfinex’ trading platform, who also control the ‘tether’ virtual currency, have engaged in a cover-up to hide the apparent loss of $850 million dollars of co-mingled client and corporate funds.” – Press Release, Attorney General James

USD Tether and most other stablecoins in the market are supposed to be a fully-backed digital representation of USD, but skepticism has been at the center of Bitfinex and USD Tether for years.

According to the findings, Bitfinex used an eye-watering $700 million of its Tether reserves to plug the $850 million loss, yet again creating deeper doubts about how many “real” U.S. dollars are actually backing Tether.

“Bitfinex has already taken at least $700 million from Tether’s reserves.  Those transactions – which also have not been disclosed to investors – treat Tether’s cash reserves as Bitfinex’s corporate slush fund, and are being used to hide Bitfinex’s massive, undisclosed losses and inability to handle customer withdrawals.” – Press Release, Attorney General James

Bitfinex has responded with an open letter to traders denying the claims of losing funds and assuring its uses of full compliance with authorities.

“We want to assure you that the allegation that we have “lost” $850 million is categorically false. We have been advised that these amounts – whether in whole or in substantial part – are, in fact, seized and safeguarded in several jurisdictions, including Poland, Portugal, the United Kingdom, and the United States.” 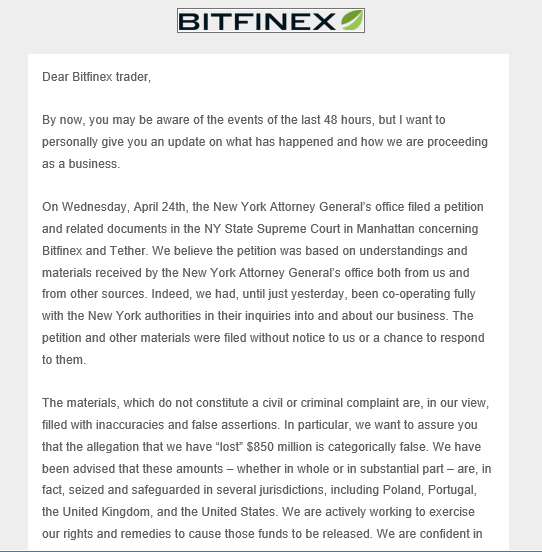 According to Whale Alert, a bot on Twitter that monitors large transactions and activity on various blockchains, Tether’s treasury digitally minted 300,000,000 USDt, worth approx. $302,282,370 at the time of writing. Yes, you read that right! 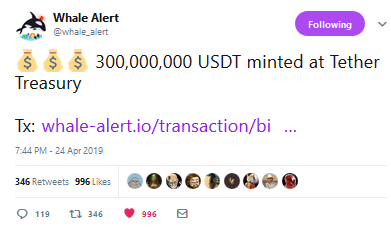 To make matters worse and also reported at Crush The Street, Bitfinex’s hacked Bitcoin has suddenly started moving again. Is this a coincidence/bad timing or something more?

The Stablecoin Saga! Can Exchanges Protect Users Against a Tether EXIT?

As reported last month, USD Tether may not be backed by tangible U.S. dollars at the ratio of 1:1. There is no official audit for the community to reference, and it will likely not be the last time Tether and Bitfinex are in the headlines.

Tether’s reign of dominance over the cryptocurrency market as the largest stablecoin could end. JPM Coin has the potential to dwarf every stablecoin that’s actively trading, and Facebook’s mysterious new digital asset will also be pegged to the U.S. dollar and likely have regulatory clarity.

Other stablecoin alternatives also give users more diversity from Tether’s uncertainty. Greater regulatory clarity is needed for the sector to move forward.

With many leading exchanges listing U.S. Tether that may be running on a fractional reserve system, the question now is how much the Tether tokens are TRULY worth and whether or not exchanges can protect users’ account balances if Tether exits the sector abruptly.