Tether, a widely-used, USD-pegged token, is claiming $30 million worth of its tokens have been stolen, triggering a temporary break in Bitcoin’s latest price rally!

After the theft, Tether put out an announcement, holding an anonymous attacker responsible for the incident.

The Tether token is a widely-used fiat substitute for USD on many cryptocurrency exchanges, such as Poloniex and Bittrex, enabling the ease of transferring dollar value from different exchanges that only list cryptocurrencies.

Tether is popular amongst all types of crypto users, as it shields a user’s net worth against the volatility of the cryptocurrencies, keeping it pegged to USD.

Most popular exchanges do not have the option of deposits or withdrawals using fiat currencies, only trading with digital currencies.

It is not the first time Tether has experienced controversy. With accusations of Tether and Bitfinex involved in market manipulation, combined with the loss of $70 million of users’ funds, many now believe this latest incident regarding the stolen Tether tokens is the result of an inside job!

In recent months, other accusations of Tether misrepresenting its value in dollars due to manipulation have surfaced.

How Does This Affect Bitcoin’s Price?

Yet again, Bitcoin reached all-time highs, silencing critics with a breath-taking trade price of above $8,000. However, this price rally was temporarily paused, as news of the hack sent shockwaves throughout the markets.

Uncertainty and fear are still influencing the markets, as no one truly knows how this will turn out and whether or not Tether will be able to recover the lost funds. Fortunately, the bullish markets remain persistent, with overall market capital across the space increasing and Bitcoin still trading above $8,000. 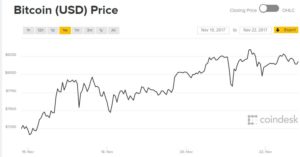 Altcoins such as Dash, Ripple, and Litecoin have also performed well, remaining strong despite the hack.

Although USD Tether is not a competitor to other digital assets, if there is further drama surrounding the trustworthiness and legitimacy of this fiat-pegged token, fear, uncertainty, and doubt could increase the market’s volatility.

Many may resort to using real USD or other fiat currencies, rather than the token, triggering a sell-off, or users may simply resort to holding Bitcoin instead.

We will keep you updated as the situation unfolds.