Over the past few weeks, the Verge team has promised its community a monumental partnership with an industry leader…

Verge seems to know how to get the market’s attention. It has been under the skeptics’ watchful eyes and within the last month underwent a hard fork after a hacker found a vulnerability in its codebase. On top of that, John McAfee has mentioned Verge in numerous controversial tweets in the past. 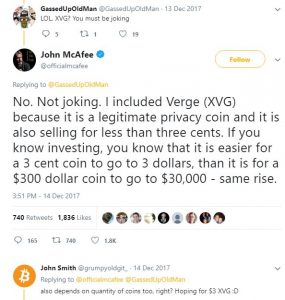 What the Partnership Means for Verge and Cryptocurrencies

In terms of price, it remains to be seen how this affects Verge, but if we look at Dash, Litecoin, and Bitcoin itself, the network effect and being seen by the average investor or retailer is as important as the technological prowess itself.

According to Alexa.com, Pornhub.com is the 34th-most-visited website in the world, meaning Verge is now exposed to a large slice of Internet traffic on one of the most highly-ranked websites!

Disclaimer: This is not investment advice. Please research carefully and only invest what you are willing to lose. Be aware that news of partnerships does not always mean a cryptocurrency will perform well in price.