Will the SEC Be Running Its Own FULL BTC, ETH, and XRP Nodes to Watch Your Transactions?

Regulators Want to Be Their Own Bank? No, They Want Your Data!

News has emerged that the United States Securities and Exchange Commission (SEC) is planning on expanding its understanding of blockchain technology and cryptocurrencies by running nodes on the Bitcoin, Ethereum, and XRP blockchains through contractors.

Other cryptocurrencies also included involve EOS, Bitcoin Cash, Stellar, and other leading coins, with requirements of each node running comprised of all the data from the genesis (first) block to the most recent operations on the blockchains (full node).

The news has come as a surprise to many, while highlighting the lengths the SEC will go to towards understanding cryptocurrencies’ technological architecture. Based on the statement released, the regulators seek to gain data from a primary source as opposed to a secondary source, such as a blockchain explorer. 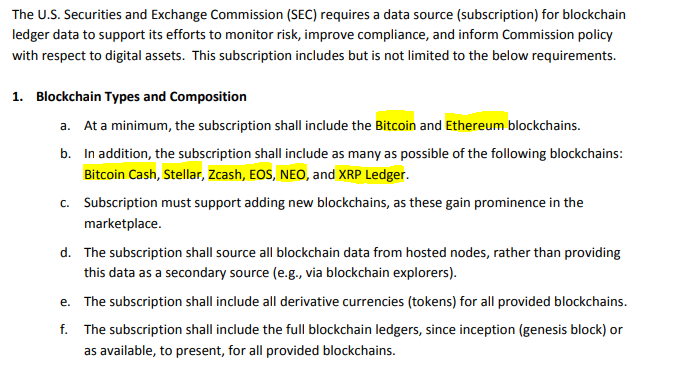 More Blockchain Surveillance, Although Anyone Can Monitor an Open-Source Blockchain…

Based on further requirements given in attachment 1, the SEC is attempting to get a better understanding of the data generated on the blockchain and the variety of algorithms running on each of them, transactional hashes, timestamps, and more. Blockchain surveillance and monitoring looks like a likely result of this push by the SEC to run a node.

Last week, we covered the IRS sending letters to cryptocurrency users based on data obtained in late 2018 and why the blockchain is also a double-edged sword. Blockchain provides greater data efficiency for corporations and federal authorities, as well as the little man who can independently send and receive value.

Open-source and decentralized blockchains such as Bitcoin allow anyone to run a full node and access the data that is immutably stored. It’s important to note that the SEC running a node on the blockchains of popular cryptocurrencies has zero influence on the networks.