As Bitcoin holds above $5,000 and the world discusses the implications of China banning cryptocurrency mining, rumor from “sources” of Nathaniel Popper, a New York Times journalist, is that Facebook is attempting to raise $1 billion in funding for its new cryptocurrency, nicknamed by many as Facebook Coin. 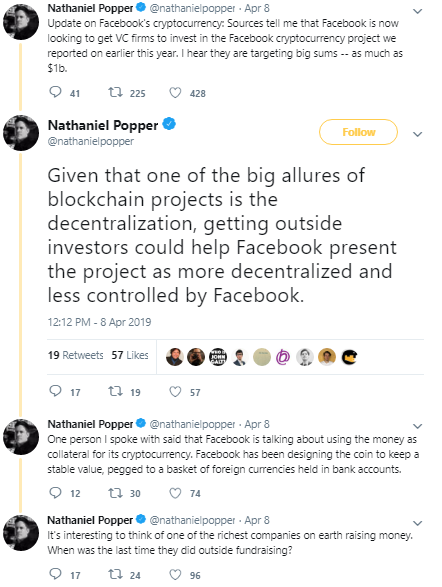 While Popper’s rumor must be taken lightly, the funds allegedly being raised aim to back the new coin, similar to how other stablecoins are backed by real U.S. dollars.

It’s a well-known fact that Facebook is moving towards the blockchain sector for redemption after a string of privacy scandals in the last year, with updates from CEO Zuckerberg himself on the benefits of cryptocurrencies on Facebook’s platform and popular messaging apps, such as WhatsApp and Facebook Messenger.

Will Facebook dethrone Bitcoin? Similar questions were asked when JPMorgan announced their own cryptocurrency, JPM Coin. It is likely that Facebook integrating blockchain technology can only benefit and legitimize the technology and the digital assets running on top of the technology, creating greater exposure.

Facebook’s new cryptocurrency will be a stablecoin, backed by U.S. dollars and likely catering towards micro-payment usage. Bitcoin, Ethereum, and others trade freely with market and fundamentals valuing it accordingly.

With different yet compatible use cases, Facebook Coin could serve as an effective on-ramp into the digital asset markets while allowing people to store their funds out of the clutches of the high-street banks!

If this is the case and the rumors are indeed true, it could be a matter of time before rival platforms follow the trend and could be a game-changer for the crypto sector!