A World Where Blockchain Tech is Adopted and Mainstream

A World Where Blockchain Tech is Adopted and Mainstream

The Latest Chapter in the Digitization of the World

Since the commercialization of the Internet, our world has moved more efficiently, faster, and businesses are either innovating to stay relevant or risk being left behind.

The Dotcom bubble created a wave of wealth for those with the foresight to understand and capitalize on the Internet and digital revolution.

The historic crash that followed is still remembered, but it did not symbolize the end of the Internet of Things, rather the beginning of its next phase of evolution and adoption. For example, Facebook, Uber, and Alibaba emerged as the Internet began to leave a larger footprint on the population.

One can also argue that the 2008 economic crash helped reset the economy enough to bring in larger tech-based companies, pushing out smaller competition and obsolete businesses that were failing to keep up with the digital adoption trend.

Fast-forward a decade (give or take a few years) and we now have the next phase in the evolution of the Internet of Things: blockchain tech and cryptocurrencies!

Since Bitcoin and blockchain tech’s emergence in 2008 and 2009, it has been deeply explored to solve the problems created by the centralized financial system.

Allowing users to transfer value and settle payments with no intermediary required, cryptocurrencies are now at the point where they pose a serious threat to companies like VISA and open up new solutions in how we store finances without authorities being able to manipulate accounts and payments at their own whim.

One of the features giving cryptocurrencies an edge is that transactions cannot become corrupted on the respective network or system. Once data is confirmed on the blockchain, it cannot be altered unless the community agrees to “roll back” the blockchain.

As trust in the current financial system remains low, new technology has a chance to prove itself, creating a more efficient and secure platform to process payments and possibly usher in a new alternative to a weakening dollar.

Governments and banks could develop their own solutions to replace the current system, reducing the time it takes to process a payment across the world from days to seconds! This is already in motion, with RippleNet seeking to innovate the banking sector and create an Internet of Value ecosystem.

Central banks could begin issuing their own digital assets to replace paper currencies. Financial crashes usually create openings for new technology and businesses to emerge, which is a strong possibility in the coming decades. 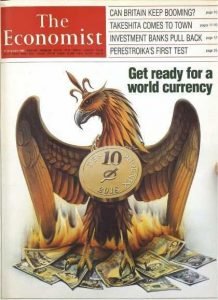 Simply put, a blockchain is a database that can be used for decentralized or centralized purposes, depending on the reasons it was developed.

It is an ideal platform to store data, and in a world where data is the new oil, banks and big corporations could use the blockchain to keep record of every user on their respective network. With the added security that comes with using a blockchain, this is an opportunity too big to miss! 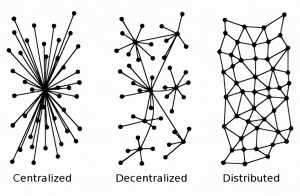 Blockchain tech is and can be built for much more complex use cases than being payment systems. Decentralized applications can be built to create a new and more powerful version of the Internet we use today.

By using smart contracts, 2nd– and 3rd-generation blockchains are pushing the boundaries of innovation. By creating applications that run smaller applications, our very identity could be processed on a blockchain. In the not so distant future, people’s names, accounts, qualifications, and more could be linked to a unique hash or reference number on a global distributed ledger.

We are looking at a potential wave of automation similar to what we witnessed in the early nineties. Blockchain technology can liberate — and also control — the masses…