XRP Spikes to 4 Million Transactions Within 24 hours, But Why?

4 Million Transactions in One Day?

Blockchain’s primary use case thus far is in payments and decentralized applications, and handling the increasing transactional and operational throughput is the primary objective for the blockchain industry.

The overall number of transactions on leading blockchains has increased in the last 18 months. Notably in recent weeks, XRP has witnessed record-breaking surges in daily transactions on its ledger, heralded as a major success by the XRP community on twitter.

According to blockchain statistic Websites XRP Charts and Bitinfocharts, the XRP ledger experienced an all-time high of 4,048,275 daily transactions on November 23rd, 2019, while BTC transactions were at 306.2k and Ethereum’s totaled 631.6k.

It would not be fair to ignore controversial Bitcoin SV, which processed almost 400k “transactions,” but there is information that these are not transactions, but rather data from a downloadable weather app…

Other popular cryptocurrencies, such as Bitcoin Cash, Litecoin, and Dash barely have an impact on the chart that Ethereum and XRP have dominated in the recent years.

What Triggered the Transaction Spike?

Another variable in this is how much network security is compromised for the speed of transactions: less block confirmations being required can make a transaction faster, but more confirmations typically signal higher validation on the network and reduce the chances of double-spending.

In terms of which blockchain is processing the most valuable transactions, average transactional value in USD terms is often highest in BTC, BCH, and LTC.

It also appears that bad actors are deliberately attempting to congest the XRP ledger with empty transactions, spending 40,000 XRP to open up to 2,000 accounts. The deliberate act to spam the network made little impact and served as an interesting stress test for analysts. 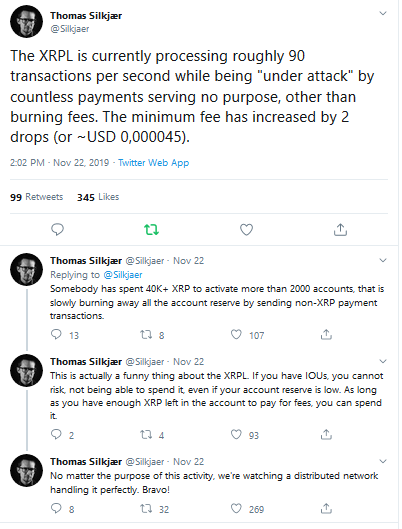 Ripple’s new partner, MoneyGram, could be ramping up operations by utilizing the XRP cryptocurrency.

MoneyGram CEO Alex Holmes revealed at SWELL 2019 that 10% of his company’s transactional volume was through ODL, which could be leading to the increase in transactions we’ve seen in the recent weeks.