YouTube Dragged Into Bitconnect Lawsuit! Are They Partially to Blame?

Earlier in the year, during the last minute of the cryptocurrency hype, we reported on the demise of the popular MLM lending platform Bitconnect.

Despite the warnings, thousands of investors lost their money, with little to no hope of any refund or return of the lending website. This served as a cold but vital lesson to people and came at a time where regulations on cryptocurrencies became a primary focus for governments and regulating bodies.

In the aftermath of Bitconnect’s exit, famous Ponzi promoters began to exit in droves, deleting videos and online evidence and leaving their followers in despair without any guidance. This prompted a class action lawsuit against Bitconnect by investors seeking compensation. 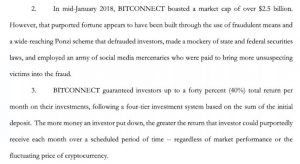 People who lost money by participating in the Bitconnect scheme must also accept responsibility for their actions, but sites such as YouTube failed to protect their users as well…

According to court documents, YouTube failed to identify the fraudulent activity of Bitconnect, despite having overwhelming heaps of evidence (in the form of videos and complaints) that its users were being exposed to a Ponzi scheme.

If YouTube heeded the GENUINE warnings of Bitconnect videos and advertisements on its platform, some of its users may have been protected from losing money to the Ponzi scheme.

Many fully legitimate content creators and alternative media outlets protest Google and YouTube’s demonetization and account removal stances, and the report states that YouTube benefits from the success of the YouTube Partnership Program, which most large and influential channels are part of. 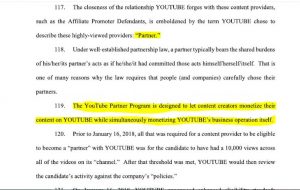 David Miller of Silver Miller said in an email to Coin Telegraph:

“This case is not about YouTube being the speaker or publisher of the content on its website. Instead, liability is predicated on YouTube’s failure to act after learning from content directly published on YouTube of the readily foreseeable harm posed by its advertising partners… As the old saying goes: Sometimes when you lie down with dogs, you get fleas.”

Bitconnect’s rise and fall shows us how easy it is to lose money in the cryptocurrency space. Trusted, established websites like YouTube let down thousands of users, but it is also key to do your own research and make logical decisions.

Be responsible for your own actions, and only invest what you are willing to lose.