Zcash Listing on Gemini Exchange is Positive for All Privacy Coins

Zcash Given the Thumbs Up!

Privacy-focused altcoin Zcash proved to be one of the big winners during this year’s Consensus event week. The cryptocurrency exchange Gemini, which is owned by the Winklevoss twins, gave the green light for Zcash to be listed alongside Bitcoin, Ethereum, and Litecoin on May 22nd , with Bitcoin Cash to be added shortly after.

“We are excited to announce support for Zcash trading and custody. Starting on Saturday, May 19th at 9:30am EDT customers will be able to start depositing Zcash into their Gemini accounts. Trading will begin on Tuesday, May 22nd at 9:30am EDT.” – Gemini Blog

The Winklevoss twins’ exchange is a fully-registered cryptocurrency exchange in New York that is now the first to obtain a license to trade privacy-focused Zcash. 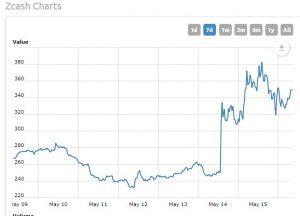 Zcash’s privacy works by enabling the encryption of transactions using zk-SNARKS (Zero-Knowledge Succinct Non-Interactive Argument of Knowledge). Zcoin, ZClassic, and other privacy-based cryptocurrencies also use this, and it’s also being developed as a privacy feature on Ethereum’s blockchain.

Zk-SNARKS works by allowing fully-encrypted transactions to be confirmed as valid on the network. The Zerocoin protocol is the precursor to the Zerocash protocol, which was later developed for Zcash.

Being added to a fully-regulated exchange gives privacy coins legitimacy. In the past, many analysts  stated that cryptocurrencies focused on encrypting transactions could face an uphill battle in the long run as blockchain tech begins to be implemented into mainstream finance.

Information was recently released that Japan’s Financial Services Agency had been applying pressure on local cryptocurrency exchanges to remove coins such as Dash, Monero, and Zcash due to “bad actors.”

Despite this, Gemini listing Zcash is a positive step for the embracement of financial privacy and independence. Zcash also benefitted from last year’s Consensus event, as JP Morgan announced it would integrate Zcash’s protocol into its “enterprise blockchain platform.”

Disclaimer: This is not investment advice. Please always conduct your own research, and only invest what you are willing to lose.