Your U.S. dollars, already ravaged from steadily climbing inflation over the months and years, is now officially deteriorating at a breakneck pace. Prices of nearly all goods and services continue to climb at the fastest rate in 3 months, wreaking havoc on whatever value remained in your cash holdings and making it virtually a done deal that the Federal Reserve will raise interest rates for a fourth time before the year is over.

In order for bond yields to keep pace with rising inflation, the Fed will have little choice but to hike 10-year Treasury rates, which in turn will likely put pressure on an already shaky stock market. The S&P 500 went into correction territory in October, is experiencing volatility in November so far, and can’t easily afford more turbulence in the coming weeks as fund managers yearn to show a profit by the year’s end.

According to a recent report from the U.S. Department of Labor, the core consumer price index (excluding food and energy) rose 2.1% from a year earlier. That’s up 0.2% from the prior month – as I said, the fastest gain in three months. 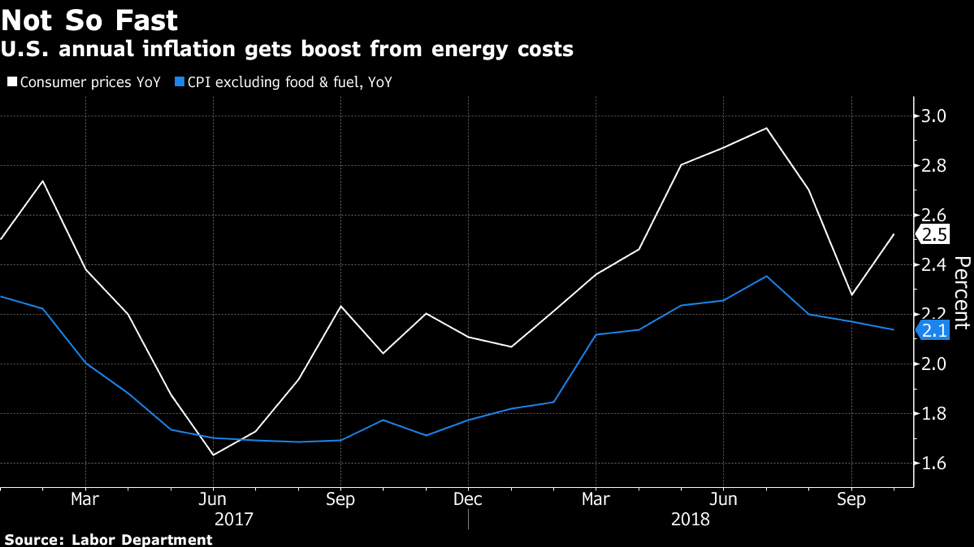 “These are pretty steady inflation prints,” said Omair Sharif, senior U.S. economist at Societe Generale, concerning the pickup in the pace of inflation. A rebound in used-car prices in October was partially to blame for the increase in CPI.

It’s no exaggeration to say that October was a rough month for the American middle-class pocketbook. The core consumer price index that I just mentioned does not include any increases in food and energy costs. The Department of Labor’s report revealed that gasoline prices rose 3% in October compared to the prior month on a seasonally adjusted basis; this represents the biggest gain in energy prices since January.

When we use a broader and more inclusive consumer price index, we see that prices for American consumers actually rose 0.3% in the month of October; this is up 2.5% compared to a year earlier. Including energy prices in the calculations is a much more true-to-life measure of prices for the American middle class, since high gasoline prices have a negative impact on nearly everyone in this broad demographic.

The fact that the price of a used car has increased is also a blow to the purchasing power of the American middle class, as used vehicles are often a necessity for citizens who cannot afford to make the payments on a new car. October was especially painful in this regard, as used car prices rose 2.6% during that month – the biggest increase since 2009.

In fact, according to car buying advice site Edmunds, the average price of a used car last month stood at $20,084; that’s up 3.5% from the same period last year, and up nearly 19% from the same period five years ago. On top of that, rising interest rates are driving used car costs even higher, with payments reaching a record high of $400 per month and loan terms averaging 66.9 months – the longest ever.

It seems that the middle class just can’t get a break nowadays. Expenses for medical care – a major burden in a nation where premiums, deductibles, and co-pays are all rising in tandem – rose by 0.2% in October, according to the report from the U.S. Department of Labor.

And things are likely to only get worse, as the full impact of tariffs have yet to show up in a big way in the CPI figures. Unless there’s a major breakthrough in negotiations, the 10% percent tariffs on $200 billion of Chinese imports are due to rise to 25% in January; the current administration has also threatened to escalate tariffs to cover all imports from China.

It’s yet another chapter in the ongoing saga of the crumbling U.S. dollar, which has steadily lost value since the government took the nation’s currency off of the gold standard in 1971. For savers, investors, and retirees, the idea of hiding cash under the bed as a safe haven investment strategy is a lost cause in the current market environment, where cash is no longer king and the average consumer gets squeezed from all directions.