Even Trump is Missing This Major Indicator!

You might not think globalism is on the rise, but consider the simple move the Fed has made to ease in their interest rate policies and what that has done globally to counties around the world acting in unison.

Here we are in month 121 of the longest business expansion in history—albeit the weakest one. The unemployment rate is at 3.7%, and they’ve already thrown in the towel and have cut the rates. This morning the federal funds rate is 2.12%.

So here we are again…

After months of range-bound price action, gold gained an astonishing 12% during the three months of summer. Gold then took a breather – perfectly understandable – but that leaves investors wondering whether gold is setting up for more gains.

Historically, whenever central banks like the Federal Reserve go into easing mode, they’re basically flipping the switch to the “on” position for the gold price. This alone will bolster gold as debt instruments like the U.S. dollar and Treasury bond yields deteriorate and gold’s value increases in comparison.

An indicator most people are completely missing…

I’m sitting here this morning drinking my coffee after watching the political debate this week mulling over the global mess taking place and no one is talking about this, not even the president.
Take a look at the PMI, or purchasing managers’ index, which gauges the general direction of economic trends in the manufacturing and service sectors. Manufacturers are on the front edge of the world economy, and what they’re witnessing and the decisions they’re making about spending and hiring can quickly and profoundly affect global growth.

PMI readings have been falling globally over the past 15 months, and during the past year the U.S. PMI has declined relentlessly:

Indeed, The ISM U.S. manufacturing PMI declined to 49.1% in August, the lowest reading in more than three years. Any reading below 50% signals a contraction – and a possible recession alert – and August’s PMI contraction ended a 35-month expansion period in which the PMI had averaged 56.5%. 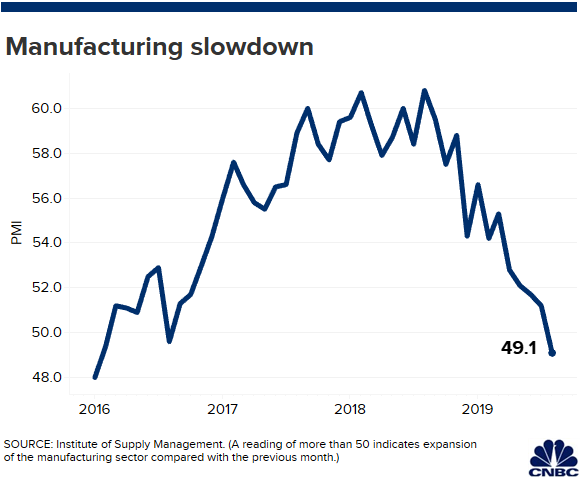 All of this adds up to more interest-rate cuts ahead, along with alarm bells ringing on the American and global economies – not encouraging for the majority of retirees and savers, but fantastic for anyone holding gold through 2019 and 2020.

This is why I’ve promoted:

Take control over your finances. I promise you, if you dig deep enough roots, you will be resilient through the storms that are coming.