Everyone Wants – No, Demands – a Bailout Now

After the U.S. government bailed out big banks with taxpayer-funded TARP money in 2008, the term “bailout” became a dirty word. Politicians would use it against their competitors, claiming that their opponents wanted to forcibly redistribute wealth from the middle class to the ultra-wealthy.

Isn’t it funny, then, how everything can change in an instant when a crisis strikes? Suddenly the same folks who deprecated bailouts are now asking for a handout from the government. Actually “demanding” is the right word for it, as they stopped asking politely a long time ago.

Naturally, the large banks were the first in line. Why wouldn’t they be? The American government demonstrated its largesse during the financial crisis. The bankers know full well that any loans will carry near-zero interest rates. The Federal Reserve, which sets interest rates, is responsible for that.

The Fed’s emergency repo operations are now being conducted on a daily basis. Through purchases of bonds and mortgage-backed securities, the nation’s central bank has pledge to pump $1 trillion into the American banking system. You can expect that figure to increase as the banks will undoubtedly ask for more. 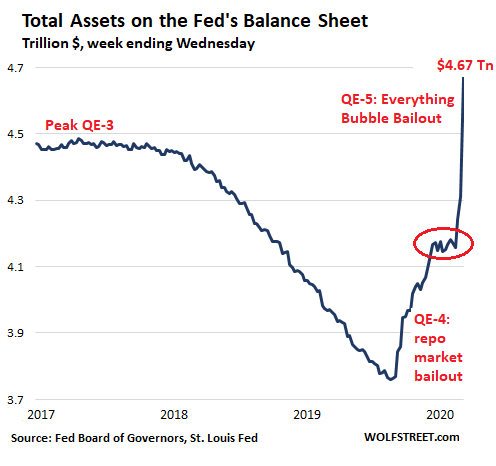 The “too big to fail” culture started with the banks, but it has spread throughout multiple sectors of the economy as more industries claim they’re entitled to a government rescue mission. The air-travel industry is a case in point as a key lobbyist group is strenuously pressing for a $58 billion loan.

To be more precise, they want more than just a loan. In fact, the lobbyist group Airlines for America insists on outright cash grants above and beyond the multibillion-dollar loan. According to this lobbyist organization, “Loans alone are not sufficient and should be coupled with a worker payroll assistance program and targeted tax relief.”

Moreover, apparently this industry is combining begging with threats – a common manipulative tactic. For instance, United Airlines CEO Oscar Munoz has threatened the U.S. government that his company “will begin to take the necessary steps to reduce [its] payroll in line with the 60% schedule reduction we announced for April” if it doesn’t receive aid promptly.

Not everyone’s on board with the lobbyists’ requests, however. For instance, Republican Senator Rick Scott of Florida has objected that “We shouldn’t be bailing out large corporations that have enjoyed years of growth and prosperity.” Soon enough we’ll find out whether our elected representatives will cave into the lobbyists’ demands.

Other industry representatives are using pity as their primary manipulation tactic. As an example, American Hotel Lodging Association CEO Chip Rogers attempted to evoke sympathy with his plea to the government: “Take post 9-11, post-financial crisis– double it – and it’s still not there.”

Yet others are replacing words like “bailout” and “handout” with nicer-sounding euphemisms in an attempt to reframe the begging as a savvy business move. Thus, International Foodservice Distributors Association CEO Mark Allen says with a straight face, “We’re not asking for a handout; we just want to keep our employees.”

Meanwhile, International Franchise Association executive Matt Haller has adopted the ever-popular argument that America’s citizens will be at risk if his industry doesn’t receive massive quantities of taxpayer money. He contends that there are “restaurants and hotels — all without customers, who need capital now in order to protect the greater public health.”

As you can see, the frenzy of bailout requests has sparked an uptick in the use of replacement words. After all, lobbyists have to make their demands appear sensible. Hence, you’ll undoubtedly be seeing an increase in the use of terms like “targeted,” “temporary,” “relief,” “need-based,” and “forbearance” in the coming weeks.

Who’s the ultimate beneficiary here? There are many, but the middle class isn’t among them. One thing is known for certain, though: to quote California Representative Ro Khanna, “The only industry that hasn’t been slowed down by the virus is the lobbying industry.”